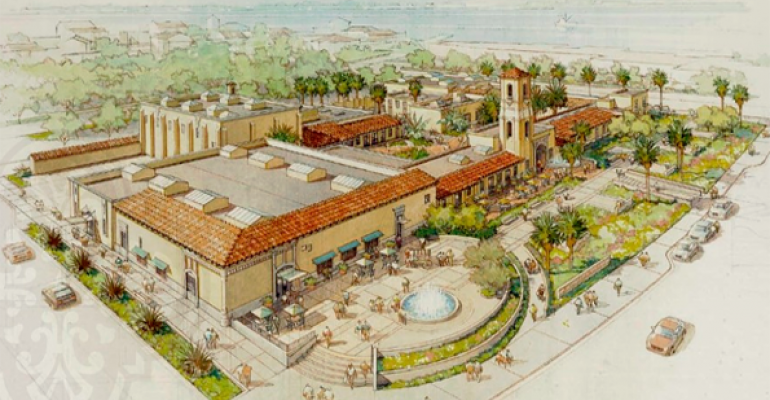 a rendering of The Headquarters, San Diego, Calif.
Commentary

CenterCal began the project in 2006, but had to halt work because of the recession. Now, the firm plans to complete Meridian Town Center by 2014.

Terramar Retail Centers advanced the construction of The Headquarters, a $40 million adaptive re-use and renovation of the Old Police Headquarters in San Diego, Calif. into a 100,000-sq.-ft. retail and entertainment complex. The project will contain up to 30 stores and restaurants and is part of the revitalization of San Diego’s waterfront.

Terramar will incorporate the retailers’ branding into the existing historic façade. The main courtyard of the complex will feature fountains and colorful landscaping. There will also be plazas and walkways.

Carrier Johnson is serving as the architect on the project. Legacy Building Services is the general contractor.

The Headquarters is scheduled for completion in the fall of 2013.

Houston County Galleria was developed in 1994. Belk, JC Penney and Sears anchor the property. Jana Reeves will continue to serve as the center’s general manager.

The project included the expansions of existing vacant buildings to house Dick’s Sporting Goods and Nordstrom Rack stores; site and landscaping improvements throughout the property; a shell expansion, building façade and storefront improvements for an existing Michaels store and the opening of a new drive-thru Starbucks, among other things.

In an unrelated transaction, Jo-Ann Fabrics & Crafts signed a lease with Brixmor for an 18,350-sq.-ft. store at Cayuga Mall in Ithaca, N.Y.

Englewood Construction began work on a 31,621-sq.-ft. interior build-out for Ross Dress for Less at Ford City Mall in Chicago. Chadha & Associates will serve as the architect on the project.

HomeGoods signed a lease for a 24,000-sq.-ft. store at Veterans Square Towne Center in Lyndhurst, N.J. Chuck Lanyard and Matt Flath, of The Goldstein Group, represented the landlord in the transaction.