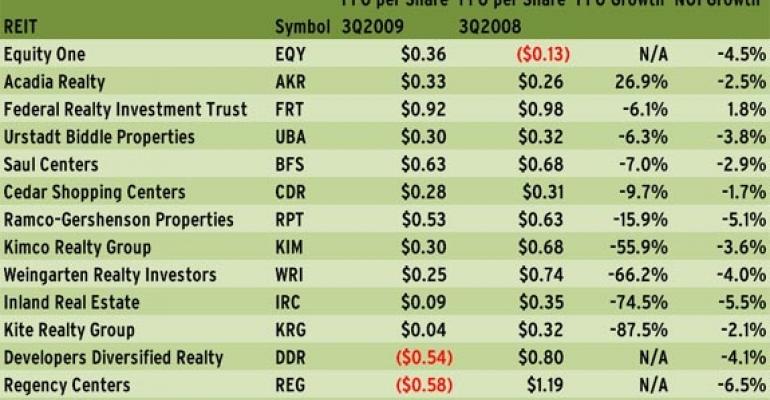 After months of scrambling for tenants, shopping center REITs reported a rise in leasing activity in the third quarter compared with earlier in the year. REIT executives were particularly encouraged to see greater interest in big-box spaces, one of the retail niches hardest hit by bankruptcies and liquidations.

"I think we saw signs of stabilization, sequential occupancy increases were somewhat encouraging," McMillan says. "Some of the big-box space that has been vacated is being leased, so once demand picks up, that should help pricing."

During earnings calls with analysts, REIT executives confirmed they were seeing increased demand for that space from the remaining big-box players, including Bed, Bath & Beyond, Best Buy, Kohl's, Dollar Tree, TJ Maxx and Marshalls. For example, 66 percent, or 460,000 square feet, of new leasing deals completed by Kimco Realty Corp. in the third quarter were in the big box category, according to COO David Lukes. In addition, Lukes was encouraged to see increased leasing activity in markets most affected by the housing crisis, including Florida and California. New Hyde Park, N.Y.-based Kimco operates a 113-million-square-foot portfolio.

In the absence of strong sales growth, however, shopping center REITs still face the risk that occupancy levels might fall another 100 basis points before bottoming out, according to Federal Realty CEO Donald Wood. Federal Realty, a Rockville, Md.-based company with a 19-million-square-foot portfolio, emerged as the only shopping center REIT this quarter to report positive same-store NOI, at 1.8 percent.

"We'll see what happens after the holiday season, but the possibility of a continued drop in occupancy by another 100 basis points or so in 2010 is still very much a possibility, given the lack of a broad recovery in tenant sales levels and our unwillingness to do uneconomic deals for the sake of short-term occupancy gains," Wood said during the company's conference call with analysts on Nov. 5.

The leasing picture gave some hope that the tide may be turning for the sector, even if occupancy levels still dragged behind results reported a year ago and rental rates continued to trend down. Occupancy rates in the third quarter remained above 90 percent and, in many cases, firms registered increases from the second quarter of the year. At the same time, only two of 13 shopping center REITs eked out year-over-year gains in funds from operations. In addition, most companies in the sector continued to report negative same-store NOI, which many attributed to the lingering effects of the bankruptcies of big box tenants including Circuit City and Linens 'n Things.