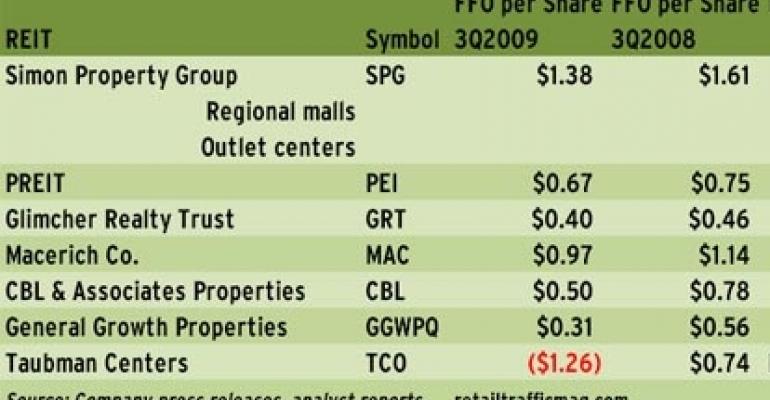 Regional mall REITs turned a corner in the third quarter, as most of the sector's players focused on getting balance sheets in order and reported a more hopeful attitude from tenants. Out of the seven regional mall REITs, at least four outperformed consensus analyst estimates for the quarter ended Sept. 30.

"It turns out that mall REITs outperformed expectations," says Rich Moore, an analyst with RBC Capital Markets. "It was a good quarter, not unbelievable, but occupancy seemed to be stable and leasing velocity was picking up substantially. Retailers are back and they are looking for space and a lot of that is coming from people looking to trade up and get into spaces they could never get into."

Mall REITs continued to clean up company balance sheets in the third quarter and most have managed to reduce debt loads, conduct public debt and equity offerings, secure refinancing and otherwise deal with upcoming expirations. As a result, the sector seems on solid footing as 2009 draws to a close.

Indianapolis-based Simon, the country's largest retail REIT, with 246 million square feet of space, stood strong with $4 billion in cash that could be used to buy properties or to continue to pay down debt. For its part, Santa Monica, Calif.-based Macerich ended the quarter with $6.99 billion in outstanding debt, $900 million less than at the end of the second quarter. The REIT's strategy of using joint ventures to move debt off its balance sheet worked and, as of now, has been concluded, according to statements made by CEO Art Coppola during the company's Nov. 5 conference call with analysts.

CBL & Associates, a Chattanooga, Tenn.-based REIT with an 83.6-million-square-foot portfolio, also made strides in whittling down its leverage level with credit line extensions and a stock offering. The company has been looking at joint venture opportunities as a way to further cut down its debt load, but won't force through a deal if no good options arise, according to CBL executives.

The only mall REIT still facing some challenges appears to be the Columbus, Ohio-based Glimcher Realty Trust, which ended the quarter with a credit line balance of $366 million and few unencumbered assets. Glimcher operates a 21.7-million-square-foot portfolio. The company recently signed a $320 million pact with Blackstone. That will allow it to pay down some debt, but it still has work to do. "A heavily over-levered balance sheet continues to burden the Glimcher story," Moore wrote in a Nov. 3 note.

Executives at regional mall REITs also reported increasing stability among tenants. While mall retailers expect flat to modestly positive same-store sales during the holiday shopping season, merchants have prepared for the modest season by scaling down inventories, says Moore. Many retailers are also preemptively slashing prices in order to get a leg up on the competition. It is hoped that the strategies will help prevent a re-run of last year when retailers entered the new year with a glut of unsold merchandise that had to be hawked at deep discounts.

Occupancies decreased by about a percentage point in the third quarter for mall REITs, but in most cases firms reported numbers above the 90 percent mark. According to a few REIT executives, tenants were starting to discuss potential new deals for 2010.

"We were…encouraged by customer traffic only being down by approximately 1 percent portfolio wise, an improvement from the prior quarters," he said.