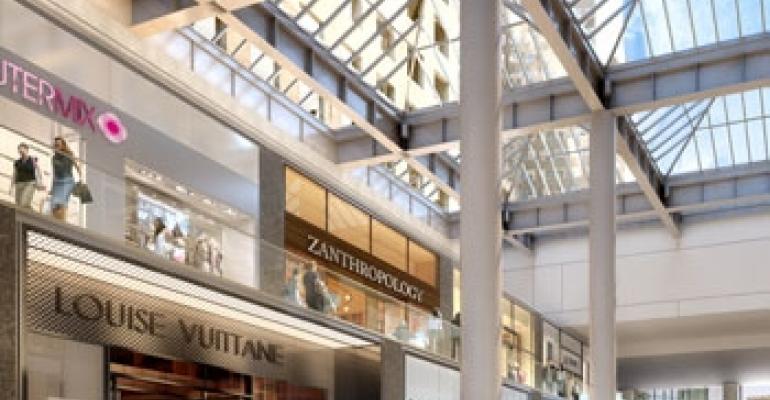 When the new retail hubs planned for the area surrounding the World Trade Center site finally come on line, New York brokers say they have the potential to be among the highest producing retail venues in the country. The challenge is that the developers involved in the projects have to get the merchandising mix and layout right to realize the area’s full potential.

After undergoing upgrades in the 1990s, the old World Trade Center mall, located on the concourse level below the Twin Towers, produced $900 per sq. ft. in sales, three times the national average for U.S. malls in 2001.

"The space at the World Trade Center was some of the best retail space around," says Jeffrey D. Roseman, executive vice president and principal with Newmark Knight Frank Retail, a New York City-based real estate services firm. "After 9/11, retailers were not anxious to go downtown. But when a lot of the old office buildings in the area started being converted to residential, that picked up demand."

In the past decade, downtown’s residential base has grown more than 50 percent, to 56,000 people, and is expected to reach 60,000 by 2013, according to a recent report from the Alliance for Downtown New York, the organization that manages the Lower Manhattan Business Improvement District (BID).

All of those residents, office workers and tourists mean extra shopping dollars. Today, rental rates on high profile streets downtown range between $200 and $300 per sq. ft., Spiegelman says. With the completion of the Fulton Street Transit Center in 2014 and the World Trade Center Transportation Station in 2015, average rents downtown might reach $400 per sq. ft.

"When was the last time New York City saw new transportation hubs?" Spiegelman notes. "If you think about the ease of access for tourists, employees and commuters, that will be driver [for shopping]. So what you see in terms of retail demand in the area today and what it’s going to be tomorrow, it’s really worlds apart."

Currently, the piece of the puzzle that’s already moving ahead is the renovation and expansion of the retail complex at the Brookfield Office Properties-owned World Financial Center. Previously, the complex lacked synergy between the retail venues located at the Winter Garden and those that were positioned in side corridors, according to Robin Abrams, principal and executive vice president with The Lansco Corp., a New York City-based real estate services firm. It was also difficult to reach.

In June, Brookfield unveiled a redevelopment plan for the space. The $180 million project will involve bringing in three new retail anchors to West Street; creating a 25,000-sq.-ft. European style marketplace with waterfront seating and a 30,000-sq.-ft. dining terrace with views of the Hudson River; and adding 90,000 sq. ft. of in-line apparel shops and 40,000 sq. ft. of restaurants to the complex. In addition, Brookfield will create a glass pavilion that will link West Street to the upcoming transportation hubs via underground pedestrian passageways.

Brookfield plans to complete the upgrades by the spring/summer of 2013.

"They are really carefully looking at remerchandising and re-tenanting the space, and most importantly, changing the feel of the project to become more prominent, and visually pleasing and welcoming, and not so much an afterthought," says Abrams.

The Fulton Street Transit Center is scheduled to come on line in 2014, and will feature approximately 70,000 sq. ft. of retail space. The Metropolitan Transit Authority (MTA) is reportedly searching for a private property manager to handle retail leasing for the complex.

Finally, the Westfield Group plans to open the initial phases of the new World Trade Center retail complex in early 2015. The complex will involve 365,000 sq. ft. of space, but will be configured differently than the old World Trade Center venue, which was in many ways a traditional enclosed mall, with a contingent chunk of space, according to Abrams. The new retail space will be located across multiple levels, including at street level. There will be clusters of retail around each building in the new World Trade Center complex that will be connected by pedestrian passageways on the concourse level.

Westfield plans to spend approximately $612.5 million on the project through a 50/50 joint venture with the Port Authority of New York & New Jersey (PA), which controls the World Trade Center site. Abrams says Westfield and the PA are already starting preliminary talks with potential retail tenants for the space.

The brokers say retailers are already starting to think about making commitments at the upcoming retail venues downtown. At issue is the fact that opening dates for all three complexes are still a few years away. Plus, even though the World Trade Center site comes with a great reputation for retail sales, the fact that the new space will be configured differently makes them wonder if the new configuration will work as well as the old one, Abrams says.

"Before, it was very straightforward," she notes. "It was very easy to navigate all of the retail and food [offerings]. Now nobody is certain about the final plans and because it’s going to be different, how do you create the synergy and the ease with which people can navigate the different areas? You want people to access all of that retail on the concourse level, in addition to shopping on the street level."

That’s why apparel retailers in particular still need more convincing to sign leases downtown, says Roseman. At the same time, companies such as Walgreens are taking huge chunks of space in the area in recognition of the renaissance that’s about to take place. In addition to opening a 22,000-sq.-ft. Duane Reade branch at 40 Wall St. earlier this year , the drug store operator recently signed a lease for 22,000 sq. ft. at the former Borders space at 100 Broadway.

As time goes by, other chains are bound to follow suit, says Roseman. While retailers will still look to Fifth Avenue and Soho to open their initial locations in New York City, downtown will serve as a strong choice for third or fourth or fifth stores that will be far enough from the flagships not to cannibalize sales, he and the other brokers say. They expect to see tenants along the lines of H&M and Zara and Apple at the new World Trade Center mall. And those stores will also have the potential to become the highest producing stores in their chains.

"It’s a very different configuration and a very different retail environment than what was under the old World Trade Center," Spiegelman says. "But I still think when you pull it all together it will be one of the most productive shopping centers in the United States."