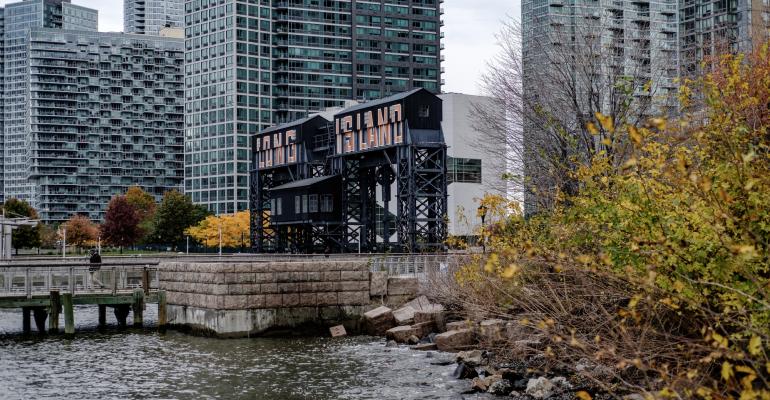 A gantry that reads "Long Island" is seen from Gantry Plaza State Park in the Long Island City neighborhood in the Queens borough of New York, U.S., on Friday, Nov. 9, 2018. As reports emerged this week that Amazon.com Inc. was close to an agreement to set up a new office hub in Long Island City, the prospect of all those jobs, shoppers, and potential tenants or homebuyers drew cheers in the fast-growing neighborhood across the East River from Manhattan. Photographer: Christopher Lee/Bloomberg
Office

Most companies searching for space in New York City aren’t looking for 4-million-plus sq. ft. and $3 billion in incentives, they note.

Amazon’s pullout of its HQ2 plan from New York City came down to opposition from local politicians over corporate incentives and residents who didn’t want the e-commerce giant in their Long Island City neighborhood. But it shouldn’t have a long-lasting impact on the city’s commercial real estate market.

That is the assessment of real estate experts, several of whom were caught by surprise by Amazon’s quick abandonment of New York after a very public one-and-a-half-year national search that pitted large metro areas around the country against each other to provide the most appealing package of incentives, talent and real estate to lure the corporate giant and 25,000 jobs.

“When I saw that Amazon was floating this idea of leaving, I thought there was too much traction to go back, yet here we are,” says Victor Rodriguez, senior market analyst with research firm the CoStar Group.

Part of the problem was that New York’s $3 billion incentive package for Amazon was agreed upon essentially behind closed doors between the New York City Mayor Bill de Blasio and New York Governor Andrew Cuomo and touched off a firestorm of protests and opposition at the local city council and neighborhood level.

“I don’t believe there will be any long-term negative impacts (on commercial real estate),” Rodriguez says. Still, had Amazon gone through with the HQ2 plan, there would have been gains that now won’t be realized. One area that won’t see the gains is the retail market in Long Island City, Rodriguez notes. High-paying tech employees would have attracted more retail to the neighborhood. The multifamily sector also won’t see the growth that it would have in that area if Amazon had followed through with its plans, he says.

Still, New York City remains known as a tech, financial and media hub and will continue to draw companies to relocate and to expand there in the future, Rodriguez notes. “New York was healthy before Amazon came along and I think it will continue to be healthy; it would have been great addition to have another tech giant in the city of New York.”

But the Amazon project may have also been too big for the neighborhood it chose, according to Barbara Denham, a senior economist in the research and economics department at research firm Reis Inc.

“Selecting Queens was like putting a square peg in a round hole. They were just too big for that neighborhood,” she says.

For its part, Amazon said in a blog post “that while polls show 70 percent of New Yorkers support our plans and investment, a number of state and local politicians have made it clear that they oppose our presence and will not work with us to build the type of relationships that are required to go forward with the project we and many others envisioned in Long Island City.”

Amazon already has 5,000 employees in Brooklyn, Manhattan and Staten Island, and will continue growing those teams, the company said. It also said it wouldn’t re-open the HQ2 search and will proceed with the other half of its HQ2 project in Northern Virginia, its plans for an office in Nashville, Tenn. and growth across other, already existing offices.

On Feb. 12, two days before Amazon pulled out of New York, local leaders in Dallas held an Amazon post-mortem event sponsored by the Urban Land Institute and hosted by HKS Architects to talk about the behind-the-scenes details of the search there. The city received two visits from Amazon and believed it was shortlisted for selection, but ultimately got knocked out because it lacked the tech talent that New York and Northern Virginia could provide, according to Mike Rosa, senior vice president, economic development, for the Dallas Regional Chamber, which led DFW’s bid. When Dallas officials saw the Washington Post story about Amazon reconsidering its New York decision, it gave them some hope the city might get another chance.

“If they were to readjust their decision … they certainly know who to call,” said Rosa.

New York city leaders should have encouraged Amazon to go to Hudson Yards, a new development on the west side of Manhattan that was more in scale with the e-commerce giant’s plans, according to Denham. At full build-out, Hudson Yards will have 18 million sq. ft. of commercial and residential space, more than 100 shops and restaurants, and about 4,000 residences. About 2 million sq. ft. of office space there is scheduled to be delivered this year.

New York City has long opposed corporate incentives and hasn’t passed a sizable incentive deal on that scale since the 1990s, Denham adds. Even the deals passed back then were unpopular.

The perception was that “a highly profitable company asking for $3 billion in tax incentives smacked of considerable greed, which is why there was so much pushback against the plan,” she notes. “The governor and the mayor should have recognized that there would be this reaction, given the magnitude of both the size of the company and the size of the incentives.”

Amazon’s quick abandonment of the deal sends a signal that a corporate expansion of that scale could have a difficult go of things in New York, according to Greg Willett, chief economist with RealPage, a provider of property management software and services.

“But again, it’s really unusual to have a deal this big, so does it do any big picture long-term damage to the New York real estate market? Probably not.”