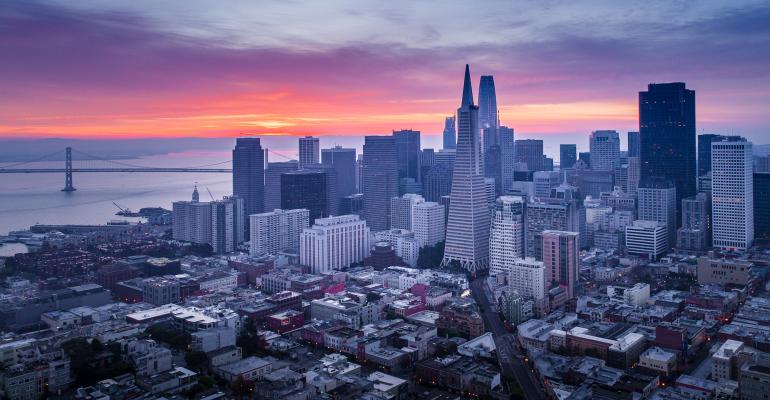 In just the past few months, Hewlett Packard Enterprise Co. said it was leaving for Houston. Oracle Corp. said it would decamp for Austin.

(Bloomberg Opinion)—Amid raging wildfires, rolling blackouts and a worsening coronavirus outbreak, it has not been a great year for California. Unfortunately, the state is also reeling from a manmade disaster: an exodus of thriving companies to other states.

In just the past few months, Hewlett Packard Enterprise Co. said it was leaving for Houston. Oracle Corp. said it would decamp for Austin. Palantir Technologies Inc., Charles Schwab Corp. and McKesson Corp. are all bound for greener pastures. No less an information-age avatar than Elon Musk has had enough. He thinks regulators have grown “complacent” and “entitled” about the state’s world-class tech companies.

No doubt, he has a point. Silicon Valley’s high-tech cluster has been the envy of the world for decades, but there’s nothing inevitable about its success. As many cities have found in recent years, building such agglomerations is exceedingly hard, as much art as science. Low taxes, modest regulation, sound infrastructure and good education systems all help, but aren’t always sufficient. Once squandered, moreover, such dynamism can’t easily be revived. With competition rising across the U.S., the area’s policy makers need to recognize the dangers ahead.

In recent years, San Francisco has seemed to be begging for companies to leave. In addition to familiar failures of governance — widespread homelessness, inadequate transit, soaring property crime — it has also imposed more idiosyncratic hindrances. Far from welcoming experimentation, it has sought to undermine or stamp out home-rental services, food-delivery apps, ride-hailing firms, electric-scooter companies, facial-recognition technology, delivery robots and more, even as the pioneers in each of those fields attempted to set up shop in the city. It tried to ban corporate cafeterias — a major tech-industry perk — on the not-so-sound theory that this would protect local restaurants. It created an “Office of Emerging Technology” that will only grant permission to test new products if they’re deemed, in a city bureaucrat’s view, to provide a “net common good.” Whatever the merits of such meddling, it’s hardly a formula for unbounded inventiveness.

These two traits — poor governance and animosity toward business — have collided calamitously with respect to the city’s housing market. Even as officials offered tax breaks for tech companies to headquarter themselves downtown, they mostly refused to lift residential height limits, modify zoning rules or allow significant new construction to accommodate the influx of new workers. They then expressed shock that rents and home prices were soaring — and blamed the tech companies.

California’s legislature has only made matters worse. A bill it enacted in 2019, ostensibly intended to protect gig workers, threatened to undo the business models of some of the state’s biggest tech companies until voters granted them a reprieve in a November referendum. A new privacy law has imposed immense compliance burdens — amounting to as much as 1.8% of state output in 2018 — while conferring almost no consumer benefits. An 8.8% state corporate tax rate and 13.3% top income-tax rate (the nation’s highest) haven’t helped.

Of course, California isn’t alone in squandering such advantages. New York City has been the world’s top finance hub for many years, and increasingly had become home to a thriving tech community as well. But a similar blend of poor policy choices, high taxes, needless red tape, rising crime, and occasional outright hostility — as with the senseless opposition to Amazon.com Inc.’s proposed headquarters — has been pushing both industries to friendlier climes in recent years.

Such carelessness is all the more damaging because a tech hub is more than the sum of its parts. Such clusters accelerate the flow of ideas, concentrate skilled workers and create productive new networks. They’re likely to boost investment, business formation, innovation, wages and growth. And their benefits are widely shared: By one estimate, each new tech job creates five additional jobs in other industries, a multiplier effect about three times larger than that for manufacturing. That’s not to mention the immensely popular products that result.

For now, the Bay Area is unlikely to be displaced as the nation’s top tech hub. After all, it’s still home to some of the world’s most valuable companies, draws an outsized share of venture-capital investment, and remains an unrivaled incubator for startups. And predictions of Silicon Valley’s demise have proved reliably wrong for decades.

Even so, no state can antagonize its companies so extravagantly and expect them to stay put forever. As every Californian knows, the open road is all too inviting.