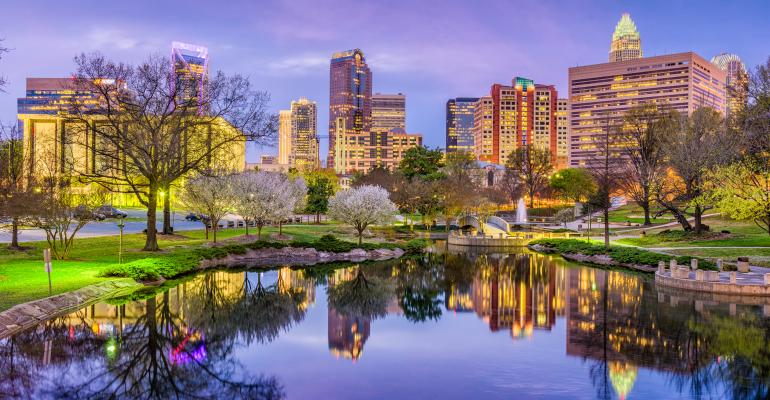 Deloitte to Anchor Next Office Phase of Legacy Union

Deloitte will be the next major company to take office space at Lincoln Harris' Legacy Union project in uptown Charlotte.

The audit, consulting, tax and advisory services firm will lease about 90,000 square feet on the top four floors at 650 South Tryon, an 18-story, 362,000-square-foot office building at the corner of Tryon and Hill streets that will represent the second phase of Legacy Union. Construction has begun on site, with Deloitte expected to take occupancy at the new building by the fourth quarter of 2020, said Johno Harris, president of Lincoln Harris.

"From our viewpoint, if you think about it, the towers that have been announced (in uptown) are effectively preleased," Harris said. "There’s not a lot of huge blocks of Class A office space and as long as the market continues to grow and there’s demand, we’re in a very good position."

The local office of Deloitte currently leases 70,000 square feet at Duke Energy Center in uptown after recently signing on to take more space at the building. The firm has more than 1,000 employees in Charlotte today and north of 1,700 across the Carolinas, said Theresa Drew, managing partner for Deloitte in the Carolinas. She said when she joined eight years ago, there were 600 Deloitte employees in the Carolinas.

"The really fun part of it is, we can look out the window and watch the building come out of the ground," Drew said. "It's (going to be) a very exciting space — state-of-the-art and close to everything our people want to have proximity to, whether that’s light rail, housing options, the airport and our clients, mostly importantly."

Anchoring a new building and having the ability to take the top floors was also an attractive sell for the company, Drew said.

The company has had conversations about the future of work with its clients, she continued, which prompted the local office to look internally at its own space.

Harris said no other tenants have signed on either at 650 South Tryon or Bank of America Tower, the first office building at Legacy Union. It's expected that future phases of the project will include some mix of, potentially, multifamily, hotel and more office or retail space.

"We continue to have good conversations with all sectors of the business, whether it’s the hospitality and hotel, whether it’s additional retail, whether it’s multifamily or additional office," Harris said, declining to comment on specifics about any imminent future phases.

The Charlotte Business Journal previously reported Lincoln Harris' intention to build another office tower at Legacy Union. Plans for a new building were filed with the city of Charlotte's development services group in September, and a rezoning petition to allow a cantilevered building design on the same site was filed in October.

The rezoning petition is expected to be up for a vote in the coming months. Harris said if City Council did not approve the petition, a building with a straighter design (instead of the cantilever) would be developed there byright.

The 10-acre Legacy Union site includes two whole city blocks bounded by South Tryon, Stonewall, Mint and Hill streets. Lincoln Harris and Goldman Sachs acquired the land, a large portion of which was the former home of The Charlotte Observer, for $37.5 million in 2016.

Ridr Knowlton and Campbell Walker of Lincoln Harris represented the landlord in the lease transaction and are marketing 650 South Tryon on behalf of ownership. LS3P Associates is the architect. Gilbane Building Co. and Shelco are the general contractors.