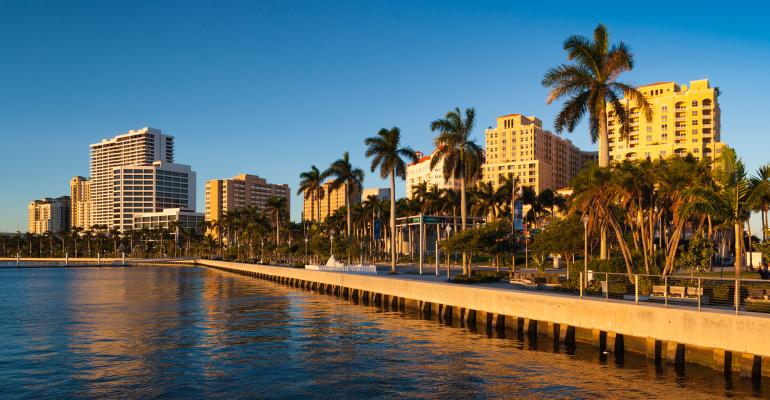 Manhattan now has the most office space available since the aftermath of the Sept. 11 attacks.

(Bloomberg) -- Goldman Sachs Group Inc. is weighing plans for a new Florida hub to house one of its key divisions, in another potential blow to New York’s stature as the de facto home of the U.S. financial industry.

Executives have been scouting office locations in South Florida, speaking with local officials and exploring tax advantages as they consider creating a base there for its asset management arm, according to people with knowledge of the matter. The bank’s success in operating remotely during the pandemic has persuaded members of the leadership team that they can move more roles out of the New York area to save money.

Goldman may yet decide against centering asset management in Florida, where it would join a growing list of firms seeking tax and lifestyle advantages. It also may opt for another destination like Dallas, where it has been accelerating its expansion, the people said.

The deliberations at the Wall Street icon, often a trendsetter for the industry, adds to the cloud over New York’s future. As restaurants and stores fight to survive, the city is trying to stem the flight of white collar jobs to states with lax tax regimes and lower costs of living.

Manhattan now has the most office space available since the aftermath of the Sept. 11 attacks. This time, the trend began even before the pandemic struck, with AllianceBernstein Holding LP shaking up city boosters in 2018 with plans to move its headquarters to Nashville.

Inside Goldman, sentimental attachment to the city where it rose to prominence is taking a back seat to the company’s ambitious target unveiled early this year to cut $1.3 billion in costs, in part by shifting employees to cheaper locales. It’s unclear how many people could eventually go to Florida. In the last decade, Goldman has incrementally expanded offices in places like Dallas and Salt Lake City to thousands of jobs in an effort to trim expenses. The virus has cemented its resolve to accelerate that shift.

“We are executing on the strategy of locating more jobs in high-value locations throughout the U.S., but we have no specific plans to announce at this time,” a spokesman for Goldman Sachs said in an emailed statement.

The firm’s newly reconfigured asset-management division pulls in about $8 billion in annual revenue and is a critical pillar of Goldman’s plans to diversify its ways of making money. A decision to create a central location for the business in Florida would not only include back-office staff but also some investment professionals, two of the people said. The shift would be carried out over time.

Goldman has looked at potential office space in the corridor north of Miami that covers places like Palm Beach County and Fort Lauderdale, the people said.

Florida’s warm weather and lack of a state income tax have lured wealthy Americans for years. But until 2020, the region struggled to peel away the rainmaking class from Wall Street’s most elite firms. Most hedge funds that relocated to the state were relatively small. And while Deutsche Bank AG built a Jacksonville campus, many personnel there have focused on back-office and other support functions.

Now the migration of larger financial firms and money managers is showing signs of gaining momentum. Some employers are trying to accommodate owners or top talent who prefer the state. Such pressure may build as throngs of New Yorkers decamp to the Sunshine State as they wait for a vaccine in spacious homes with private pools.

Already, Paul Singer’s Elliott Management Corp. plans to move its headquarters to West Palm Beach from midtown Manhattan. Other investing powerhouses like Blackstone Group Inc. and Ken Griffin’s Citadel have been bulking up their presence in the state.

Meanwhile, New York’s defenders have been calling on business leaders to stand by the metropolis, predicting it will rebound once the pandemic passes.

“With all due respect to Florida, no place can compare to New York City’s concentration of talent, education, innovation and next-generation technology,” said Bill Neidhardt, press secretary to New York Mayor Bill de Blasio. “The city continues to see new expansions and investments from the leading industries and we expect more to come.”

Goldman’s top competitors have flirted with the idea in the past. JPMorgan Chase & Co. CEO Jamie Dimon in 2013 praised Florida’s business-friendly policies and joked that he sometimes wonders aloud why the nation’s biggest bank doesn’t relocate to Miami. Executives at one point floated the possibility of moving the firm’s headquarters to the state, but dismissed the proposal over issues including the quality of Florida’s schools.

The coronavirus has stoked more serious conversation inside boardrooms, especially as executives fret about the new Democratic administration raising taxes and look to cut expenses to improve returns in an ailing economy.