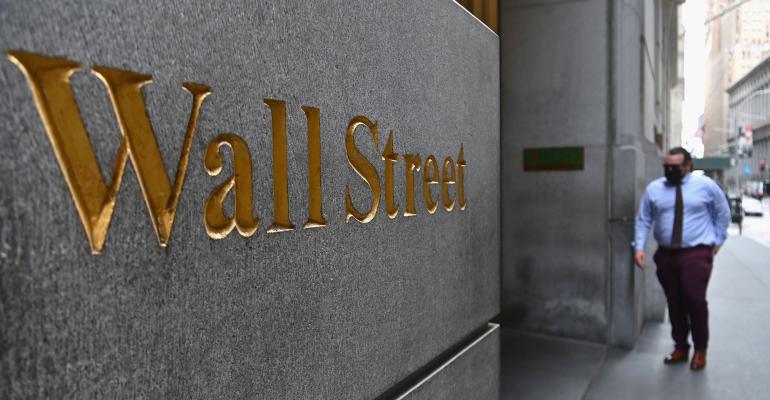 Hardly Anyone Is Actually Inside Wall Street’s Big Office Towers

(Bloomberg)—Downtown, at Goldman Sachs, the thin crowd has thinned further.

Near Times Square, at Morgan Stanley and Bank of America, foot traffic has fallen too. The same is true over on Park Avenue, at JPMorgan.

All across Manhattan, the coronavirus is once again emptying the city’s big office towers — quantifiably so. Mobile-phone location data puts foot traffic in the first week of December at a mere 20.4% of what it was back in 2019. That’s down from 24.2% in late October and the lowest since August.

Those figures, pulled together by Placer.ai, which analyzed location data for smartphones detected inside roughly 20 of Manhattan’s largest offices, point to a sobering reality — that despite the coming vaccine, the once hopeful return-to-office momentum that had built up over the summer and fall has been wiped out as a second wave of Covid-19 shuts down businesses once more.

The foot-traffic analysis looked at the major Wall Street banks, as well as One World Trade Center, the Empire State Building, the offices for Alphabet’s Google, and others. Placer.ai also found the distance traveled by the average visitor decreased to its shortest since August, a sign commuters who’d started to return to the office were opting to stay home again.

The numbers conform with anecdotes from Wall Street firms, such as Goldman Sachs and Morgan Stanley, which have seen the number of employees reporting to their offices fall over the course of the last month. And few firms expect that to change any time soon. The majority of employees at American Express, for example, will be working from home until at least June rather than report to headquarters in lower Manhattan, the company has said.

This week, Mayor Bill de Blasio warned that a full-scale shutdown may come soon after Christmas.

The reversal is a blow for the local businesses and retailers that have historically served and relied on Manhattan’s office workers.

“I hope the vaccine will save us,” said Iqbal Chowdhury, who’d sold only $20 of merchandise one recent day from his kiosk, minutes away from Citigroup’s office in Tribeca. “It was bad in spring, it was bad in summer and the fall. I didn’t know it would be this bad again.”

Some three miles uptown on 200 Park Avenue, the MetLife building is home to hundreds of employees at firms like MetLife and French bank BNP Paribas. But Ibrahim Rakhmad, who sells hot dogs, sandwiches and coffee across the street, hasn’t seen any of them lately. What business he’s had was mostly thanks to good weather. As temperatures fell, so did the number of guests willing to try his food.

“It’s bad, so bad,” Rakhmad said. “Bad winter is coming. What are we going to do? Everyone’s gone.”

The desolation was also noticeable a few blocks away, at the Whole Foods across from Bank of America’s tower near Bryant Park. The salad bar, a popular lunch option among office workers, has been downsized to comply with current safety standards, and even the remaining quick-bite options like sushi and pizza aren’t as popular as before, according to one cashier. Most of the bank’s sell-side analysts continue to work from home, according to Bloomberg’s reporting.

The falloff in workers has been detected in other ways as well.

Brivo, a company whose security and employee-access system is used in more than 2,600 sites in Manhattan, had tracked a steady rise in daily active cardholders from mid-April to a peak in early October. Since then, activity has fallen off by more than 3% and, when compared to 2019, is near the lowest levels since early June.

Similar building-access data from Kastle Systems shows New York office occupancy rates have fallen from 16.4% to 14% since late October — all while also declining in other major U.S. cities.

That’s not to say the city’s skyscraper districts are completely deserted. The food court at Brookfield Place, an upscale malls steps away from Goldman Sachs’s headquarters, was packed on a recent Monday afternoon — to the limits allowed by social distancing — though not with bankers or analysts.

It was occupied instead by seven-year-olds and their mothers or nannies who were taking a break from the cold before heading outside to enjoy the newly installed skating rink.