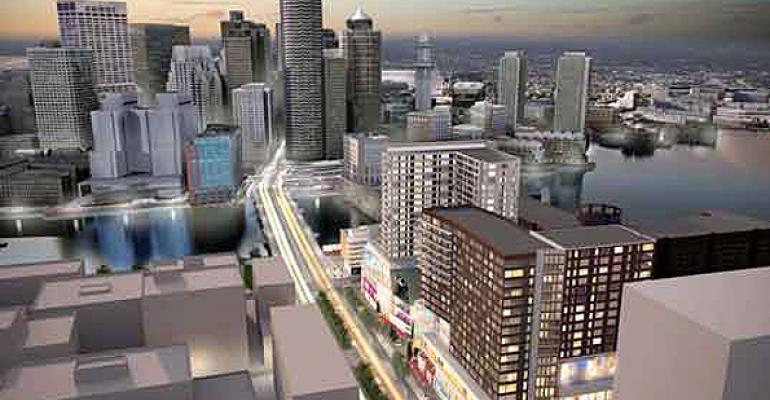 General Electric has stepped back from its plan to build a 12-story office building for its headquarters on the Boston waterfront.

Boston-based General Electric Co. (NYSE: GE) will not build and occupy a new 12-story office on the Fort Point Channel, and instead pay back $87 million in incentives to quasi-public state agency MassDevelopment, the company said Thursday.

GE and MassDevelopment will sell the 2.7-acre waterfront parcel that the company and the state agency jointly purchased in late 2016. GE plans to use proceeds from that sale to reimburse MassDevelopment $87 million the agency spent in upfront costs in the deal to bring the company's global headquarters to Boston.

“We are looking forward to moving into our permanent headquarters space in the refurbished Necco brick buildings later this year,” said Ann Klee, GE’s vice president of Boston development and operations, in a statement. “While changes in the Company’s portfolio and operating model will lead to a smaller corporate headquarters, we are fully committed to Boston and proud to call it home.”

GE will pay $87 million to MassDevelopment in order to reimburse the state for upfront expenses related to buying the two Necco warehouses, which GE is now redeveloping, a company representative said. That $87 million in upfront costs was part of the state’s $120 million incentives package to lure GE from Connecticut to Boston, and includes acquisition costs, construction costs and other expenses the state has incurred since the late 2016 deal, the representative said.

It was not immediately clear how much the 2.7-acre Fort Point parcel could sell for, but real estate in the area is a white-hot commodity. Real estate development firm Related Beal will likely pay upward of $200 million for a 6.5-acre parcel adjacent to the GE land.

The sale will include the site where GE’s new 12-story headquarters would have gone, which is shovel-ready and permitted for a 297,000-square-foot office, a company spokesperson said. The permit is transferable to a new site owner, the representative said.

GE has tapped CBRE’s local brokerage team to market the site for sale.

Work is well underway to connect two former New England Confectionary Co. warehouses to create a 95,400-square-foot office that will house 250 GE employees. GE’s executive team will work out of those offices when construction is complete later this year, and the waterfront building will serve as GE’s headquarters.

GE’s commitment to building the original proposed headquarters -- a campus consisting of the two connected brick-and-beam warehouses and a newly constructed 12-story office -- came into question almost as soon as the company replaced CEO John Flannery with Larry Culp in October.

As the long-time chief executive of Danaher Corp., Culp was well-known for keeping expenses in check. Danaher’s headquarters in Washington, D.C., is only about 50,000 square feet, even though it’s a Fortune 200 conglomerate with tens of thousands of employees worldwide.

“You sometimes see that CEO-itis comes attached with an edifice complex. ... They try to redefine themselves with a grandiose building. There’s not an edifice complex with Culp,” Jeffrey Sonnenfeld, a professor and senior associate dean at the Yale School of Management, told the Business Journal in October.

GE’s stock performance has significantly dropped off in recent years. Just over three years ago after GE announced it would move its headquarters to Boston, the company’s price has dropped by 65 percent, to just under $10 per share as of early Thursday afternoon.

The company has been beset by major problems in its power division and legacy insurance business, among other issues, with executives committing to significantly shrinking the size of the company as a result. GE has pledged to split off its health care, transportation and lighting businesses in the immediate future, narrowing its focus to its power, aviation and renewable energy divisions.

In addition to the state incentives, the company was set to receive $25 million in tax breaks from the city of Boston for the new headquarters. GE will terminate that $25 million PILOT — or payment in lieu of taxes — agreement with the city, a representative said.

The improvements to the Harborwalk, which were also a requirement of GE’s headquarters deal, are nearly complete, a company representative said. The company is also finishing refurbishment of a multi-story green bridge that connects its office with an office of tech giant Amazon.com Inc. at the adjacent 253 Summer St.

GE remains committed to funding $50 million in charitable contributions, according to a Baker administration official.

"The Administration together with MassDevelopment reached an agreement with GE for the company to fully reimburse the Commonwealth for the cost and expenses associated with the Necco Street project and the Administration looks forward to working with GE as the company grows its World Headquarters here in Boston," Lizzy Guyton, communications director for Massachusetts Gov. Charlie Baker, said in a statement.