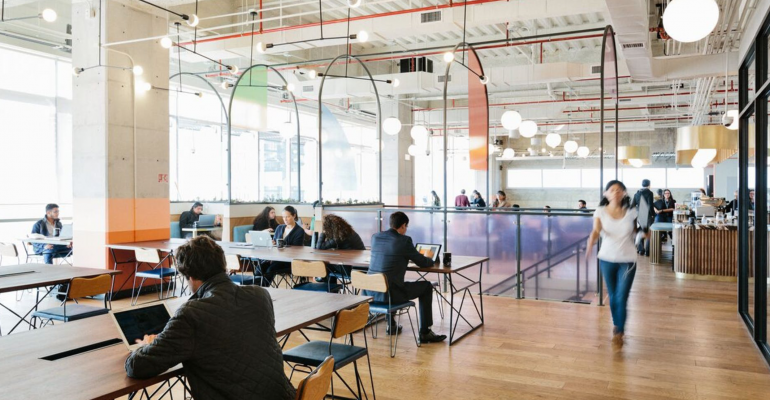 WeWork Is Getting Into Workplace Fashion With Rent the Runway

Rent the Runway will open a network of clothing drop-off boxies at 15 WeWork locations in the United States.

(Bloomberg)—Renting office space at WeWork Cos.? Soon you’ll be able to rent clothes there too.

Rent the Runway Inc. is opening a network of clothing drop-off boxes in 15 WeWork locations across the U.S. They will be placed in the lobbies of the co-working spaces, making them accessible for both the general public and those who work in the offices.

“This is really just the beginning,” said Jennifer Hyman, chief executive officer of the clothing rental service. “We have subscribers in many places throughout the U.S. and with WeWork’s massive footprint, there’s huge opportunity to grow this drop-box network.”

The boxes were previously only available at Rent the Runway’s five physical stores. They became popular among the service’s subscribers -- who pay a monthly fee for access to an “endless wardrobe” to swap items back and forth -- as well as to those who rent single items. Normally, there’s a delay due to shipping times, but if you return it to a box, it immediately reopens a slot in your subscription and you can select something new right away.

The first WeWork locations to feature the boxes will be in New York, Los Angeles, Washington, San Francisco, Chicago and Miami. Temporary pop-ups, with clothes to rent, will appear at a few locations for the launch.

WeWork President Artie Minson said such tie-ups add to the community at its offices, which also have amenities such as soundproofed phone booths and common area lounges. He said he’s open to expanding the deal.

“Future extensions can include the ability to offer access to inventory and fulfillment within WeWork locations as this ongoing partnership evolves,” he said.