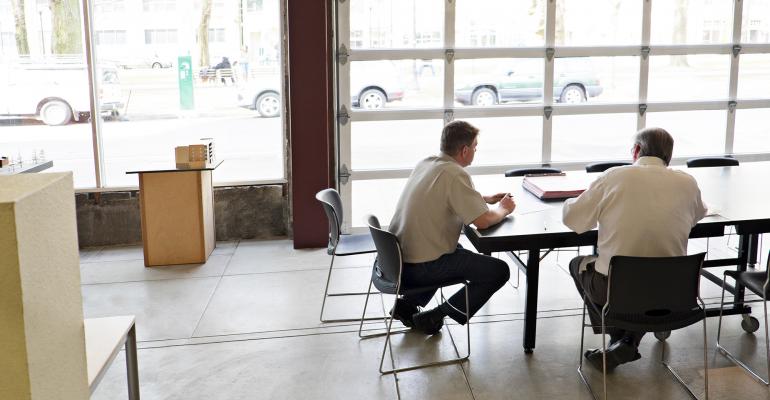 WFH Is Old News. The "Near Home" Office Is the Next Big Thing

Bloomberg's Marcus Ashworth looks at how Standard Chartered is "pushing the boundaries" with how it will allow more than 40,000 employees to work from home or "near home" permanently.

(Bloomberg Opinion) -- Standard Chartered Plc is straining every sinew to get ahead of the changes the pandemic might make to people’s work-life balance. Perhaps it’s trying to take things a little too far.

The emerging markets bank says it will “push the boundaries” for half of its 85,000 staff, who work in nine of the 55 countries where it operates. From early next year, it will offer those employees the option of heading to a “near home” location, which it will rent from an office-sharing company. Workers will also have the permanent choice of working from home more.

Chief Executive Officer Bill Winters plans to roll out a “hub-and-spoke” model for his offices that few big companies have ever even tested. It’s a good thing StanChart hasn’t committed to any firm targets on how many people will work in the new fashion, or for how many days of the week. Once reality kicks in, it may have to dial back its aspirations.

Those who find WFH too stifling might see the appeal of a satellite office in their nearest town, and it might be appropriate in countries where StanChart has big support functions such as Poland, Malaysia, China and India. Rather than commute into a big city, workers get the option of recreating the community aspects of office life closer to home. It would also help address technology deficiencies in some places. For example, some banks halted operations in India at the onset of the pandemic because employees lacked basic tools for remote working, including laptops.

But the organizational challenges of managing all of these new locations cannot be underestimated. Will it work as well for frontline bankers as for back-office staff? And there’s no mention yet of the impact on cost.

True, renting desks from a WeWork-type company would be cheaper — and more flexible — than the decades-long leases that downtown commercial property commands, especially in prime cities such as London and New York. Co-working spaces offer pay-per-use models that help keep costs in check. This might explain StanChart’s eagerness: The bank’s profitability targets are slipping amid the pandemic recession.

However, even it manages to extricate itself from existing real-estate deals in city centers, there’s still the question of how much flexibility it wants to offer staff. The more choices it gives on whether people on any given day can choose to go into the main office, the satellite office or work for home, the more expensive the approach becomes. If StanChart cuts back heavily on its city-center offices, that wouldn’t be easy to reverse.

It could follow the Facebook Inc. approach and tell staff they’ll have to accept lower pay if they choose to work out of town. That might have an impact on take-up.

A bank also has to answer the inevitable regulatory questions around different working models. StanChart has been dogged by compliance breaches for years. After being supervised by a U.S. monitor as part of a deferred prosecution agreement, the lender last year found its wealthy clients weren’t being properly vetted. That prompted a review of that business, which oversees $65 billion.

How can StanChart guarantee rigorous oversight of staff if employees are scattered across myriad locations it doesn’t ultimately control? For many bankers, the risks associated with logging onto a shared network, or of a passer-by snooping on sensitive information, could make working in a shared office impracticable.

The company’s chief financial officer, Andy Halford, believes “the word ‘office’ will become a bit of a thing of the past.” Fair enough, but the “hub and spoke” idea does create worrying new levels of complexity. Why not just stick with the model being developed at other banks, which balances WFH with coming to the main offices? Italy’s UniCredit SpA has recently offered staff the choice of permanently homeworking for two days a week, after one day proved popular — and manageable. A step-by-step approach seems more sensible.

Some firms that operate across many offices to accommodate staff from further afield are finding they no longer need all that real estate because WFH has proved so successful during the pandemic. Deloitte LLP plans to close four U.K. locations for that reason.

StanChart should be lauded for acknowledging that working life has changed forever. Greater flexibility for working parents would undoubtedly improve its culture. But trying to corral staff in a myriad of disparate locations sounds like a potential Dilbert cartoon.