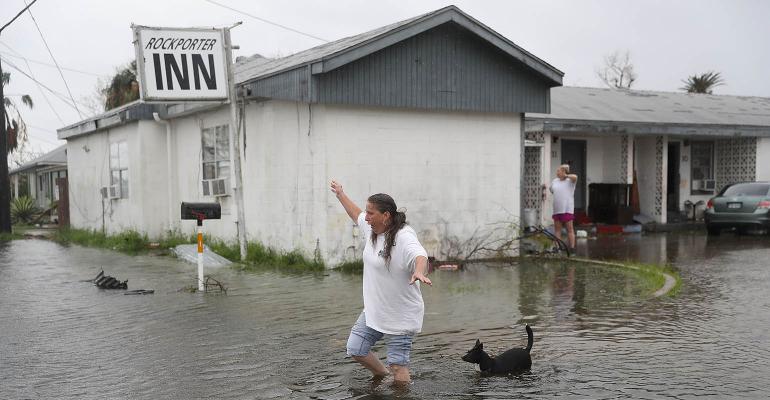 Some properties were not completely covered for the amount of damage the storms inflicted, or there have been protracted battles with carriers over hard-to-determine claims like business interruption coverage.

In part two of our follow-up on the impact of last year's hurricanes on commercial properties, we look at the processing of insurance claims.

After Hurricanes Harvey, Irma and Maria struck the U.S. and Puerto Rico, one of the biggest challenges facing the commercial real estate owners and managers in the impacted regions has been grappling with insurance claims.

Some properties were not completely covered for the amount of damage the storms inflicted, or there have been protracted battles with carriers over hard-to-determine claims like business interruption coverage.

“There’s very little known how insurance companies process these claims, how quickly these are done,” says Ron Donahue, a consultant and member of the advisory board at Sterling Valuation Group, which provides independent portfolio valuation services to hedge funds, private equity firms and banks.

After natural disasters, there is a tendency to underestimate the amount of damage or recovery time, says Murray Grenville, CEO of Sterling Valuation Group “There’s a lot of other damage, damage in the broader area, that’s ultimately going to affect your recovery time,” he says.

The storm, one of the worst in the island’s history, inflicted $33.9 billion of total damage to all dwellings, according to a July report from the Puerto Rican government. As of mid-May, the Federal Emergency Management Agency (FEMA) has dispersed $517 million in structure repair funds for owner-occupied homes and $402 million for personal property. Another $1.2 billion has been dispersed in SBA loans and $358 million through homeowners’ insurance. In total, 527,000 homeowners who registered with FEMA said they had property damage.

Puerto Rico also saw significant infrastructure damage, including a massive power outage that lasted for months in some parts of the island, further hindering recovery efforts.

The challenge of quantifying a structure’s total damage can become more difficult for some holders of property, like hedge fund managers, who have to report quarterly to investors. “It tends to take very specialized people to do it and it’s a moving target, like it or not,” says Donohue.

The quicker the claims are processed, the quicker business can get back up and running. But some claims, like those for easy-to-see physical damage, may be more swiftly decided than more complicated gray matters, like how much income has been lost because of a natural disaster.

Jeff Lamkin, CEO of the Sea Oats Group, which developed Cinnamon Shore, a vacation community along the Texas Coast, says after Harvey he found that they were a bit underinsured for business continuity coverage. But given the magnitude of the storm, which ranks with Hurricane Katrina as the costliest storm in U.S. history, Lamkin acknowledges it could have been much worse.

Roughly a year after the storm, Lamkin is still working out some claims, thanks to the help of a public adjuster, and is still waiting for some payments. The community was able to re-open relatively swiftly, as it did not sustain significant damage. But Lamkin found himself in battles with carriers over how to define some of that damage. For example, how does one exactly identify damage inflicted by the strong winds or rain that was blown by those winds? “That was a real hassle for us, what percentage was tied to the wind damage and tied to wind-blown rain damage,” he says. “It was just a battle.”

Some properties in the Houston area, which suffered record amounts of rainfall from Hurricane Harvey, were significantly underinsured for flood, says Brian Dove, national real estate practice leader at USI, an insurance brokerage and consulting firm, who is based in Dallas.

Most of Dove’s clients that were impacted by Harvey were in the restaurant, retail and hospitality industries. The loss of revenue for USI’s clients in these segments was in the millions, he says.

Dove says he was disappointed in the market’s response to certain types of coverage. For example, Dove has clients in a Houston mall that was inaccessible—aside from one entry point—after Harvey. Even though customers could not drive to the mall because of the surrounding wreckage and the mall’s closure, a carrier would not provide payment for claims of ingress and egress inaccessibility, all because of that one accessible point. “They obviously weren’t selling any product because the mall was closed for a week basically,” Dove says of his mall-tenant clients.

Another loophole unveiled during the storm arose in the area of civil authority coverage, intended to protect losses in the event of a government mandate like an evacuation. Dove says he had clients in different South Florida counties, some of which had mandatory evacuation orders during Hurricane Irma and some of which did not. Even in areas where there was no mandated evacuation, prudent business owners closed up shop. This triggered two claims scenarios: mandatory evacuation clients who closed two to three days before the storm made landfall, but could only qualify for business interruption once the storm made landfall, and those clients that shut down voluntarily, but did not receive similar coverage because there was no civil authority declaration.

In the aftermath of the storms and the insurance loopholes that were revealed, Dove is working to clarify some of these terms. “We’re negotiating with carriers as we speak to tighten that language and make it applicable to this type of event,” he says.