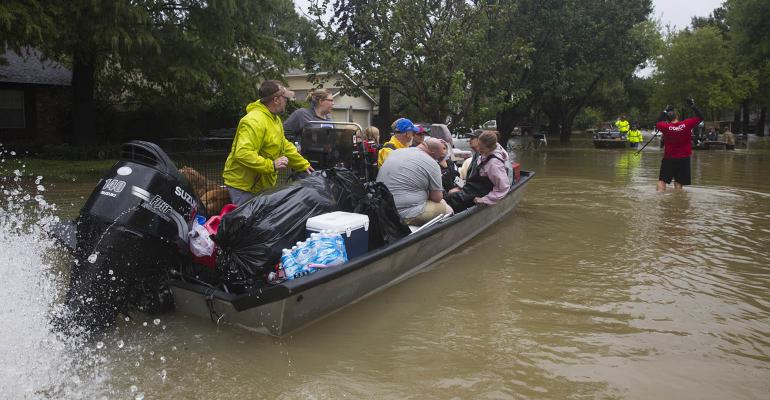 A Year Later, Assessing the Extent of Property Damage from the 2017 Hurricanes

It remains to be seen how long the complete recovery of the real estate industries, both commercial and residential, will take in the impacted markets.

This is part one of a two-part follow-up on the impact of last year's hurricanes on commercial real estate properties.

A year ago, three devastating hurricanes struck the United States. Since then, commercial real estate professionals in the affected regions have been dealing with the aftermath.

In many cases, commercial properties in the storm-ravaged areas of Texas, Florida and Puerto Rico either did not sustain significant damage or were able to bounce back. Some in the industry also say that investor interest in these markets continues to be high, pointing to the need to fuel recovery efforts or proof that some places were able to withstand brutal storms.

But there were also some challenges, such as the difficulty in finding contractors to help with repairs and fights with insurance providers over claims. It also remains to be seen how long the complete recovery of the real estate industries in these areas—both commercial and residential—will take and what the long-term impact may be on property valuations.

Hurricane Harvey was the first of the storms to make landfall in the U.S. along the Texas coast on Aug. 25 and ties with 2005’s Hurricane Katrina as causing the most damage in dollars, nearly $125 billion, according to the National Hurricane Center. The storm also directly killed about 70 people. Harvey damaged more than 204,000 homes and apartment buildings in Harris County, where Houston is located, according to the Houston Chronicle.

Harvey’s wrath was followed by Hurricane Irma, which made landfall in the Florida Keys on Sept. 10 and ranks as the fifth costliest storm in U.S. history, incurring $50 billion in damage. The hurricane inflicted major damage on 65 percent of homes in the Florida Keys, according to Architectural Digest, and left 15 million people in Florida without power. In Puerto Rico, there was near total loss of power. Between the U.S. mainland and Puerto Rico, 95 people were killed.

After Irma, which by that point has already dealt a blow to Florida and Puerto Rico, it was Hurricane Maria, which made landfall on Puerto Rico on Sept. 20, that had the greatest human impact of the three storms. A July report from the Puerto Rican government revealed that more than 1,400 people died in the wake of the storm, but a report released Aug. 28 from the George Washington University Milken Institute School of Public Health found the death toll to be closer to 3,000 people. Some 527,000 homeowners who registered with the Federal Emergency Management Agency (FEMA) said they had property damage, and 197,000 renters showed they had damage to personal property, according to the report. The storm cost nearly $90 billion in damage, according to the National Hurricane Center, ranking third among the U.S.’s costliest hurricanes.

It is still uncertain how storms like Harvey, Irma and Maria impact the values of commercial real estate over the long term, says Ron Donohue, a consultant and member of the board of advisors at Sterling Valuation Group, which provides independent portfolio valuation services to hedge funds, private equity firms and banks.

But typically, after a storm a marketplace will see some shifts: Older buildings may sustain the most severe damage, triggering an uptick in rental rates as people move into higher-quality properties and older structures are taken out of a market’s supply, Donohue says. “The result of it can be you can have an uptick in the average overall quality if things are updated or renewed,” he says.

This increase in apartment rents and occupancy was something seen in Houston and Corpus Christi, a city along the Gulf Coast, nearly immediately after Harvey barreled into Texas. Apartment occupancy jumped to 94.2 percent from 92.7 percent after the storm, wrote Greg Willett, chief economist at RealPage, in an email. The occupancy rate has dropped slightly to 93.8 percent today, as those who were displaced from single-family residences were eventually able to return to their homes. Meanwhile, the annual pace of apartment rent growth since late 2017 has reached 4.3 percent, a surge compared to the annual declines of 1.0 to 2.0 percent before the storm; much of the boost happened in late 2017, Willett said. In Corpus Christi, the multifamily occupancy rate since Harvey has hovered near 93.0 percent, up from 91.4 percent prior to the storm, he wrote. Rent growth is also higher in the region than before the storm; it is now at 3.5 percent compared to 3.0 percent annually before the storm.

Harvey also impacted the hospitality sector, says Ford Noe, regional manager of the Houston office of real estate services firm Marcus & Millichap. Before the storm, the hospitality sector in Houston was having a tough run, with the hotel occupancy rate below 60 percent for six out of 12 months prior to the hurricane, Noe says. After the storm, that figure jumped to 85 percent. “This also caused a big bump in numbers,” he notes. “We basically saw that last until the end of 2017.”

Now, the hotel occupancy rate in the Houston metro region is hovering around the 65 percent rate, as there are no longer many people left staying in hotels.

Commercial properties, because of their scope of operations and size, were able to recover from the hurricane quicker than residential ones despite a surge in materials and labor prices that slowed recovery, according to Brian Dove, national real estate practice leader at USI, an insurance brokerage and consulting firm, who is based in Dallas. “For most commercial entities, I think everything got back to normal after the first of the year,” Dove says.

Jeff Lamkin is CEO of Sea Oats Group, the developer of vacation community Cinnamon Shore, located in Port Aransas, a city on Mustang Island off the Texas Coast. Lamkin says his company immediately undertook renovations for the community, which had to have some roofs replaced and saw some flooding and other minor damage. Some 130 generators were wired together, creating a temporary power grid. They also hired nearly every mitigation resource they could find. Two weeks later, most of the damage had been fixed. “We jumped in there. … We hired everybody,” says Lamkin.

Because of the relatively quick comeback, the region has seen an increase in property values, Lamkin says. After the storm, there were investors coming to the area to find cheaper lots, but the values did not depress. “It’s just been a stable real estate market,” he says.

Still, the damage in the region—such as the flooding of homes and roadways—was significant. In the wake of the hurricane, Harris County and the City of Houston’s council adopted more stringent construction codes, including a requirement to elevate properties by two feet if they are in a 500-year flood plain. “This is probably going to delay some projects from breaking ground as developers adjust plans to be able to meet those new requirements,” Noe says.

Meanwhile, Orlando was the Florida market that was impacted the most, Willett wrote. “While Hurricane Irma did some damage locally, what really has moved the needle is the relocation of a considerable number of households from Puerto Rico, following Hurricane Maria,” Willett wrote.

Before the storms, Orlando’s apartment occupancy rate was tight, Willett wrote. But since, it has inched up to 96.6 percent. Meanwhile, rent growth has soared to 6.5 percent a year, up from a little over 4.0 percent before the storms.

Both Houston and Orlando had been experiencing a period of job growth prior to the storm—growth that appears to continue unabated, and underlying demand for housing supply in both markets also remains strong, Willett wrote.

Puerto Rico, on the other hand, faces bigger hurdles. Before Irma and Maria, the island already had been weathering a recession for the past decade. The storm caused major damage to 250,000 homes; 70,000 of those were totally destroyed, the Miami Herald reported. More than a million homes applied for aid from FEMA. After the storm, home prices on the island dropped 15 percent, according to a study by Point2Homes, after already sliding 48 percent over the previous eight years.

On the commercial side and in metropolitan areas on the island, Luis Raúl Solá, vice president and COO of Kingbird Properties, the real estate investment arm of Puerto Rican family office Grupo Ferré Rangel, says he feels the island is almost fully recovered from the storm—though there are some hotels that remain closed as they wait for insurance claims to be processed.

But there is still much suffering on the island, as affordable housing took a hit, along with its infrastructure and power in remote areas. “Maria has been the worst hurricane that has hit Puerto Rico,” Solá says.

This was one issue Solá says he experienced first-hand. His firm’s City View Plaza office complex in Guaynabo, located outside of San Juan, saw landscaping damage and water in its ground-floor lobbies—damage that was not too difficult to repair. Solá says the lack of major damage allowed the complex, which has hurricane-resistant windows, to stay open during and after the storm.

But the firm faced struggles in trying to acquire enough diesel for its workers and had to rely on a back-up generator for roughly six to eight weeks after the storm, when the island’s power grid shut down. Communication proved challenging, and Solá says his firm resorted to hand-delivering documents and messages in some cases.

Now, Kingbird is expanding its diesel capacity storage for one of its buildings and is reinforcing its emergency plans by improving its contact list of key personnel and communication channels, Solá says. “As we review all these plans, we keep in mind our priorities to protect our people and then our properties.”

Despite the tragedy Maria inflicted, there also appears to be a silver lining for Puerto Rico’s real estate future, Solá says. There have been many investors looking at the island for risk-adjusted real estate returns and learning more about the commonwealth’s tax incentives for businesses and investors, he notes. “Many investors are looking at those opportunities,” Solá says.

The affordable housing shortage, opportunities for renewable energy and need for redevelopment work are also drawing investors and companies to the island, he adds. “There is a full gamut of opportunities in Puerto Rico,” Solá says.