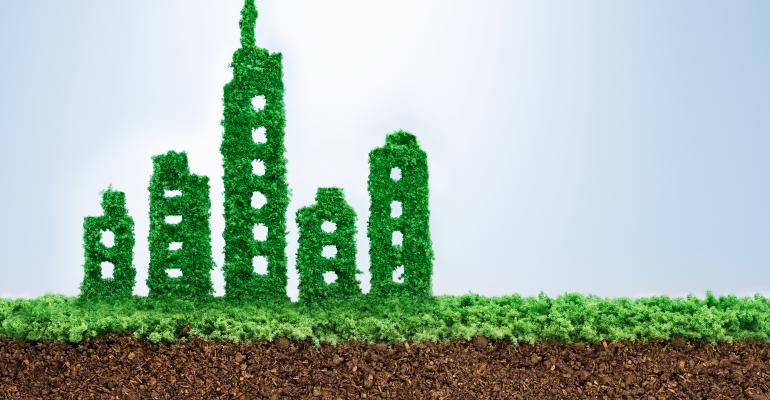 REITs are Seeing Plenty of “Green” in Bond Market

Kimco Realty Corp. kicked off its debut green bond issuance earlier this summer with a bang. When its $300 issuance for 10-year bonds hit the market in July, it attracted more than 100 investors who quickly oversubscribed the issuance six-fold with orders totaling roughly $1.8 billion. The final issuance completed at $500 million with a competitive coupon rate of 2.7 percent, which at that time was 210 basis points over Treasuries

The success of the issuance reflects a combination of factors, notably the tremendous investor appetite for green bonds—especially from investment grade companies. Kimco is BBB+ and Baa1 rated by S&P and Moody’s. “When we issued in July, we were probably the first green bonds to be issued since the pandemic started and spreads were starting to come in. So, there was a lot of pent up demand,” says Glenn G. Cohen, executive vice president, CFO and treasurer at Kimco.

“I do think you’re going to see more green bonds being issued, not just in the real estate world, but generally. There are definite pockets of money that are very focused on having investments in green bonds,” says Cohen.

Green bonds tie into growing emphasis on corporate sustainability and ESG mandates. At the same time, green bonds allow REITs to tap into a new pool of capital. Instead of the typical REIT bond buyers, they are expanding that pool of investors to include a broader market of green bond buyers. According to Reuters, global green bond and loan issuance combined surged nearly 50 percent last year to hit a record $255 billion.

“What we’re hearing from issuers across the board is that they’re seeing investors who might not have considered investing in REITs who are now looking at them because of the green bonds,” says Ranjini Venkatesan, vice president, senior analyst at Moody’s. “It is not clear whether that has translated to better bond pricing, but the investor pool has definitely expanded.”

REITs are cash constrained investment vehicles, because they pay out the majority of net income to investors in dividends. As such, they need to be able to access capital markets and bond markets, adds Gabriel Foguel, associate director, U.S. Corporates at Fitch Ratings. “So, expanding your investment base to a non-REIT base is highly advantageous for REITs, because you broaden your ability to access capital,” he says.

However, it also is worth noting that green bonds as a percentage of REIT’s overall unsecured bond issuance has not changed meaningfully over the last three years. According to Fitch Ratings, REIT green bond issuance has been hovering between 7-11 percent of total issuance volume. “I do think you could see that go up a little as you see more REITs tap the green bond market,” says Foguel.

It has been a big year for REIT bond issuance in general. Despite the pandemic, investment grade REITs had good access to the bond market and were able to take advantage of the low rate environment. “They have done a lot of pre-funding and pre-financing. So, a lot of that capital raising has been pushed forward,” says Philip Kibel, associate managing director at Moody’s. The activity in the past year does make it difficult to predict how the overall pipeline for bond issuance and green bonds specifically will shape up in 2021, he adds.

Green bond issuances are coming from those firms that have larger pipelines or initiatives where they can put that capital to work. According to Fitch Ratings, 42 percent of the green bond issuances in 2020 have come from data center REITs in particular. Data centers are energy-intensive businesses, and they have an increased focus on energy efficiency and renewable energy procurement in order to meet intensifying ESG considerations, notes Foguel. In addition to Equinix, Digital Realty Trust has been an active issuer of green bonds.

The caveat to the green bonds is that they have to be used for sustainable initiatives. Kimco plans to put its green bond proceeds to work in sustainable projects, including a recently completed LEED certified multifamily project at its Pentagon Centre mixed-use development in Virginia and future sustainable projects in its pipeline ranging from water retention and renewable energy projects to new LEED developments. “We felt very comfortable doing green bonds at this point, because we knew we had good use for the proceeds,” says Cohen.

The limitations on how proceeds from green bonds can be used does not appear to be a constraint, especially as the focus on reducing carbon emissions, managing climate risk and enhancing ESG platforms continues to grow. Most REITs have developed ESG platforms or have sustainability programs that have been operating for some time. So, they can allocate capital from the green bond issuance to past, current or future projects, notes Venkatesan. “For certain companies, green bonds could become a bigger part of the capital structure, but we will have to see how this source of capital develops,” she adds.