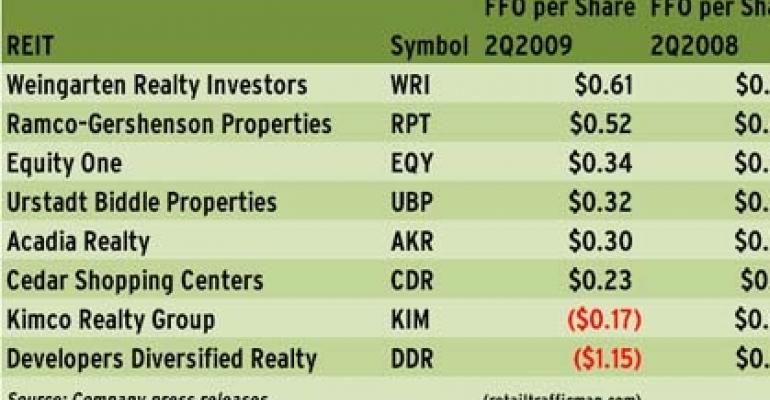 Shopping center REITs are posting solid performances for the second quarter of the year and have shown a marked improvement in leverage levels—the main area of concern for analysts over the past 24 months.

Of the eight sector REITs that have reported their earnings so far, four have beat consensus analyst estimates, by a range of $0.02 per share to $0.11 per share. Occupancy levels, though down compared to the second quarter of 2008, remained above 90 percent across the board. Debt to total market capitalization ratios have moved below 80 percent, in some cases dropping into the 40 percent to 60 percent range. In fact, some analysts say that for shopping center REITs, the market might be at or near bottom, promising a period of relative stability going forward.

"REITs have raised a lot of equity, so concerns about debt are gradually abating. It seems like the credit markets have started improving and [REITs] have proven they can raise debt,” says Robert McMillan, industry analyst with New York City-based Standard & Poor's Equity Research Services. "There are one or two that have onerous debt burdens which they need to address, but I wouldn't say they are going to be the next General Growth Properties.”

Industry-wide stock offerings that began in late March have helped ease some of the pressure on REIT balance sheets. From April through June, there have been 41 secondary equity offerings in the REIT sector totaling $13.4 billion, according to NAREIT. During that period, retail REIT shares rose 38.84 percent. Also helping matters is that credit markets have thawed some, with lenders showing increasing willingness to sign off on mortgages and extend lines of credit for trusted players.

In April, for example, Kimco Realty Corp. (NYSE: KIM), a New Hyde Park, N.Y.-based REIT with a 113-million-square-foot portfolio, received a $220 million unsecured term loan from a 12-bank consortium which included the Bank of Nova Scotia, Bank of America and Wells Fargo Bank NA among others. The loan helped lower Kimco's debt to total market capitalization ratio to 54.8 percent from 63.3 percent in the first quarter.

In May, Beachwood, Ohio-based Developers Diversified Realty (NYSE: DDR), which operates 155 million square feet of shopping center space in the U.S., secured two loans totaling $125 million on a shopping center in New Jersey and four centers in Puerto Rico. More significantly, Developers Diversified might also be the first in the REIT sector to receive up to $700 million in CMBS funding through the government's Term Asset-Backed Securities Loan Facility (TALF).

Also during the quarter, Weingarten Realty Investors (NYSE: WRI), a Houston-based REIT with 55 million square feet of retail space, closed a $71 million loan on five shopping centers with a major life insurer. The loan featured a seven-year term and a 7.4 percent interest rate. Meanwhile, Farmington Hills, Mich.-based Ramco-Gershenson Properties Trust (NYSE: RPT) appears close to extending its $250 million line of credit through 2012. The REIT already reduced its debt to market capitalization ratio to 75.4 percent from 82.7 percent in the first quarter through some tentative loan commitments.

Ramco-Gershenson operates a 20-million-square-foot portfolio. Earlier this year, credit concerns forced the company to consider strategic alternatives, including a possible merger with another shopping center REIT.

This doesn't mean the lending environment is anything like it was before the crisis emerged, cautions Jason Lail, senior real estate industry analyst with SNL Financial LC, a Charlottesville, Va.-based research firm. Credit is available, but only for firms with relatively healthy balances sheets and strong assets. "I think it's very dependent on the individual company [as opposed to] everyone across the REIT space getting money again,” Lail says.

Nevertheless, analysts see reason for hope in the second quarter metrics. Though many shopping center REITs got hit hard by the bankruptcies of Linens 'n Things and Circuit City, the barrage of national retailers going bankrupt or liquidating appears to have stopped, according to McMillan. In addition, many owners have been holding on to tenants through temporary rent concessions.

"The second quarter may have been the bottom for some of the shopping center REITs and things are stabilizing,” McMillan says. "Things are not as bad as a year ago.”