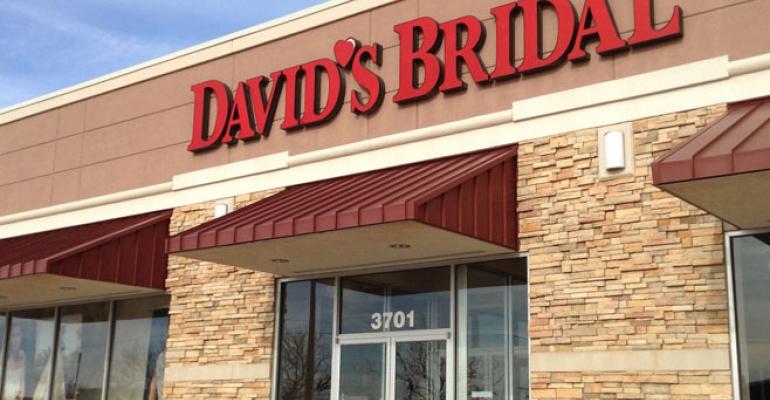 The chain needs to restructure about $760 million in debt.

(Bloomberg)—David’s Bridal Inc. is making preparations for a bankruptcy filing if the retailer can’t reach an out-of-court deal with its creditors, according to people with knowledge of the matter.

The goal is to ease the chain’s debt load of about $760 million with a pre-negotiated restructuring plan either in or out of court, said the people, who asked not to be identified because the discussions are private. Either way, David’s has no plans for major store closures or liquidations, and the business would keep operating regardless of a court filing, the people said.

The wedding-gown merchant has until Nov. 14 to make an interest payment that it skipped last month after initial negotiations with three creditor groups stalled. Active discussions with debt holders are still underway and the situation remains fluid, the people said, with no guarantee that a filing will happen or end with a pre-packaged plan in place.

David’s and three creditor groups have gone back and forth with out-of-court restructuring proposals for weeks. Early discussions contemplated a rights offering backed by existing noteholders including Solace Capital Partners and Oaktree Capital Group, a majority bond and loan holder, the people said. Those talks broke down after the financing from the funds did not materialize and creditors failed to agree on the pricing and terms of the proposed new debt structure, the people said.

“We are engaged in discussions with our lenders in order to reach a mutually agreed-upon resolution designed to strengthen our balance sheet so we can increase our financial flexibility and further invest in our business,” a representative for David’s said in a statement emailed to Bloomberg. David’s doesn’t expect the process to materially impact its business or interfere with day-to-day operations or its relationships with vendors and customers, according to the company.

David’s skipped an Oct. 15 interest payment on its $270 million of 7.75 percent unsecured notes due 2020 at the request of its creditors in order to allow more time to continue negotiations about reworking the company’s debt load. The talks involve the company and advisers for both loan and bondholders, the people said.

One proposed out-of-court scenario would include a paydown of David’s existing bank debt using cash from the rights offering backed by existing noteholders, as well as an extension of the company’s bank debt, two people said. Existing bondholders would likely take equity as part of the paydown.

But an in-court restructuring may leave the bond owners getting little more than the currently depressed market value of their holdings, while a group of senior lenders could take equity in lieu of not having their holdings fully reinstated, one of the people with knowledge of the discussions said.