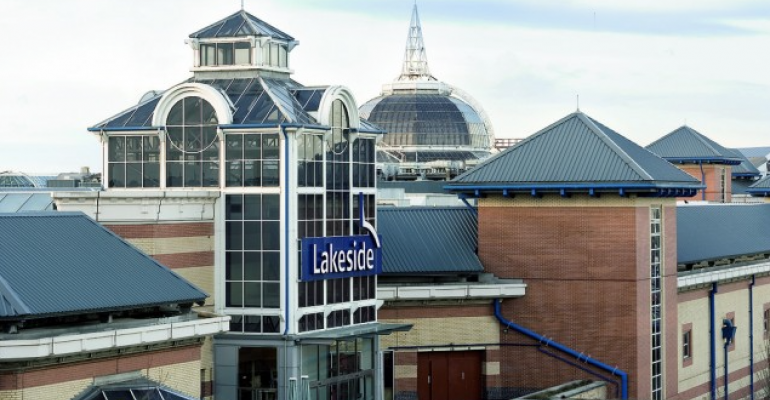 (Bloomberg)—Suburban Detroit’s Lakeside Mall, with mid-range stores such as Sears, Bath & Body Works and Kay Jewelers, is one of the hundreds of retail centers across the U.S. being buffeted by the rise of e-commerce. After a $144 million loan on the property came due this month, owner General Growth Properties Inc. didn’t make the payment.

The default by the second-biggest U.S. mall owner may be a harbinger of trouble nationwide as a wave of debt from the last decade’s borrowing binge comes due for shopping centers. About $47.5 billion of loans backed by retail properties are set to mature over the next 18 months, data from Bank of America Merrill Lynch show. That’s coinciding with a tighter market for commercial-mortgage backed securities, where many such properties are financed.

For some mall owners, negotiating loan extensions or refinancing may be difficult. Lenders are tightening their purse strings as unease surrounding the future of shopping centers grows, with bleak earnings forecasts from retailers including Macy’s Inc. and Nordstrom Inc., and bankruptcy filings by chains such as Aeropostale Inc. and Sports Authority Inc. Older malls in small cities and towns are being hit hardest, squeezed by competition from both the Internet and newer, glitzier malls that draw wealthy shoppers.

“For many years, people thought the retail business in the U.S. was a bit overbuilt,” said Tad Philipp, an analyst at Moody’s Investors Service. “The advent of online shopping is kind of accelerating the separation of winners and losers.”

Landlords that can’t refinance debt may either walk away from the property or negotiate for an extension of the due date. It can be hard to save a failing mall, leading to high losses for lenders on soured loans, Philipp said.

General Growth already extended the mortgage on the Lakeside Mall once before, in 2010. It was part of the Chicago-based company’s plan to emerge from the biggest real estate bankruptcy in U.S. history after piling on $27 billion in debt. Fitch Ratings flagged the property as potentially problematic in August, citing declining occupancy.

The mall -- anchored by JC Penney, Sears, Macy’s and Lord & Taylor stores -- was built in 1976 and last renovated 15 years ago, according to data compiled by Bloomberg. Occupancy was 79 percent as of December.

The loan has been transferred to C-III Asset Management, a special servicer that handles troubled commercial mortgages on behalf of bondholders, and General Growth failed to pay the mortgage that was due June 1, Bloomberg data show. In February, Chief Financial Officer Michael Berman said the company expected to address their 2016 maturities “successfully.”

Representatives for General Growth and C-III declined to comment on the loan.

The 1.5 million-square-foot (139,000-square-meter) mall in Sterling Heights, Michigan, isn’t typical of General Growth’s holdings, which include some of the world’s premier shopping destinations, such as Honolulu’s Ala Moana Center and Las Vegas’s Fashion Show. General Growth spun off most of its weaker malls into a separate company in 2012, and has been looking to dispose of assets that don’t fit into its strategy of owning the best properties in top markets.

It’s getting more difficult to find takers for lower-tier malls, according to Green Street Advisors LLC. The pool of buyers is shallow and funding is elusive, the real estate research firm wrote in a note to clients last week.

“The criteria to get financing is getting a little bit more stringent and cutting off the lifelines for some of these malls,” DJ Busch, a senior analyst at Green Street, said in an interview.

Green Street estimates that several hundred malls could shut down over the next decade, with properties reliant on Macy’s, JC Penney and Sears at the most risk. Sales at department stores, once the engines that powered shopping centers across the U.S., have declined almost 20 percent since 2006, according to the firm. About 800 department stores would need to shut down to restore balance between sales and profitability, Green Street said in an April report.

Insurance companies and banks that are eager to issue loans on high-end shopping complexes aren’t as willing to take a chance on a shaky mall. That pushes borrowers toward Wall Street firms that underwrite loans to sell to investors as CMBS. CMBS lending, which stalled earlier this year with the volatility in global markets, remains subdued in the face of new regulations taking effect in December. Wall Street banks have sold about $18.5 billion of CMBS deals this year, a 30 percent drop from the same period in 2015, according to Deutsche Bank AG. That’s making borrowing more expensive and choking off funding just as loans from the boom years of 2006 and 2007 come due.

Walking away from a poorly performing mall is often the best thing a landlord can do for its balance sheet, according to Green Street’s Busch. If the debt is greater than the value of the property, it might not make sense to invest in a costly redevelopment, he said.

“It takes a lot of hope and a lot of capital to reinvent a mall that’s already somewhat uncompetitive in its market,” Busch said.

WP Glimcher Inc. plans to hand over five of its malls to lenders, four of which have mortgages coming due in the next 12 months, the company said in a June 8 presentation. Chief Executive Officer Michael Glimcher last month said that it had multiple offers from lenders to refinance one of the loans, a $87.3 million mortgage on the Mesa Mall in Grand Junction, Colorado, which was due June 1.

A representative for Columbus, Ohio-based Glimcher declined to comment on its financing plans.

Late payments are creeping upward on CMBS loans backed by all property types. More than $1 billion of mortgages tied to shopping malls, office buildings and hotels soured in May, up from $884 million in April, Wells Fargo & Co. data show.

That figure will probably increase as more loans issued in the run-up to the 2008 crash fail to refinance under the tougher underwriting guidelines in place today, according to Rich Moore, an analyst with RBC Capital Markets.

“In 2006 or 2007, everything was beautiful,” Moore said. In the current environment, “if you got to a bank and you want to refinance junk, the bank says no.”