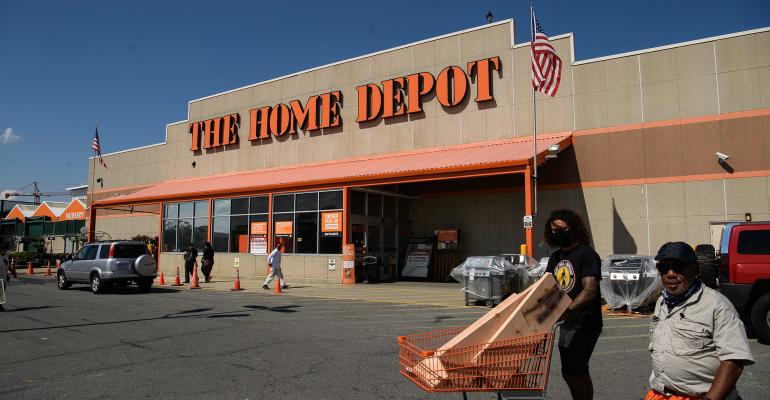 (Bloomberg) -- The Covid-19 pandemic and stay-at-home orders have prompted many to re-think their relationships. In the case of industrial distributor HD Supply Holdings Inc., lock-down restrictions pushed it back into the arms of Home Depot Inc. 13 years after the two divorced.

The $8.7 billion acquisition propelled North American building materials deals to an all-time high of $15.2 billion, and several more transactions are expected before the year ends. The previous record of $10.27 billion was set in 2007 at the peak of the pre-crash housing boom, according to data compiled by Bloomberg.

The deal announced this month reverses Home Depot’s 2007 sale of HD Supply to a group of buyout firms and gives the Atlanta-based chain -- already with legions of do-it-yourself customers -- greater access to professional contractors. Business in both categories has been buoyed by families decamping from cities to buy larger homes in suburban and exurban areas, as well as by remodel projects to accommodate work-from-home living.

“Typically building products investors are skeptical of deals in adjacent markets, and most of the high-profile adjacent transactions have received, at best, mixed reviews from the street,” Matt McClure, managing director and global co-head of industrials at Goldman Sachs Group Inc., said in an interview. “However, in the current environment, adjacent deals have been well received.”

More than 50 million homes in the U.S. are more than two decades old, according to the research company Statista. A shift toward suburban living by millennials, now the largest segment of the population, is set to create a multi-year cycle of increased dealmaking in the sector as homeowners embark on bathroom and kitchen remodels and other large projects, in addition to the smaller, cosmetic fixes required by aging structures.

“We’re seeing the largest volume of consumer-facing building products deals in at least a decade, with momentum that we expect to carry on well into next year,” Frank Sellman, managing director at Moelis & Co., said in an interview. “Quarantine demonstrated the benefits of larger, single family homes with extra space at a time when America’s largest demographic is beginning to form families.”

Home Depot follows in the footsteps of Builders FirstSource Inc. and BMC Stock Holdings Inc., which announced an all-stock merger in August in a deal valued at $2.46 billion. That deal will create one of the largest suppliers in North America, with $11 billion in combined revenue, generated across more than 500 sites, according to a statement.

Financial sponsors are looking for opportunities for consolidation to create scale amid the surge, too. Clearlake Capital Group agreed to buy Dimora Brands from the Jordan Co. last week, after buying Primesource from Platinum Equity earlier this month. Clearlake co-founder and managing partner José E. Feliciano and partner Colin Leonard said in a statement that they would “continue executing a consolidation strategy in this highly fragmented market.”

A representative for Clearlake declined to comment beyond the statement as to whether it intended combine Primesource and Dimora or execute separate buy-and-build strategies.

More opportunities for expansion are possible with transactions that could be completed this year. They include Specialty Building Products and Hillman Group Inc. being sold by buyout firms Madison Dearborn Partners and CCMP Capital respectively, according to people familiar with those situations. Such deals, which would add another $3 billion to the year’s total, are becoming more expensive for buyers.

The uplift in valuations was reflected in Azek Co. being taken public in June by Ares Capital Management and Ontario Teachers’ Pension Plan Board. Azek had posted a loss of $5.8 million for the six months ending March 31 and had a debt load of more than $1 billion. Still, it upsized its initial public offering and priced the shares above the marketed range to raise $879 million including so-called greenshoe shares.

Suppliers focused on the commercial sector are witnessing the inverse of the exuberance for the residential market.

“The lack of clarity regarding the mix of office against working from home has deterred investment in new building and large scale renovation of office and retail units,” Moelis’s Sellman said.

Few commercial deals are expected in the near term, with only those assets viewed as best in class, such as Firestone Building Products, expected to trade hands.

“There is some chance future repair and remodel spending was pulled forward into 2020 but it’s likely the increased demand for single family homes is here to stay into 2021,” he said.