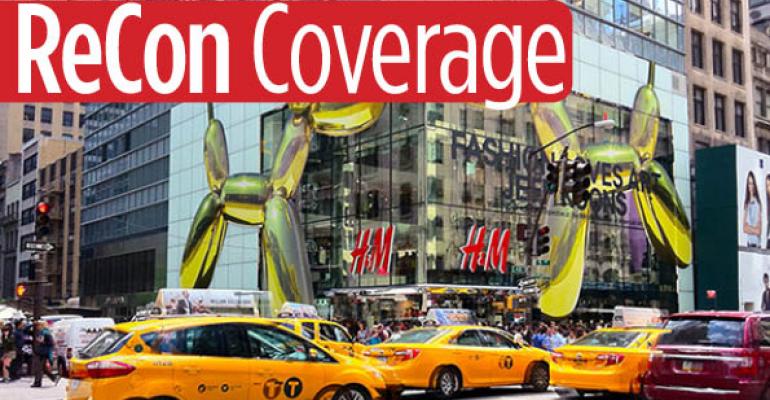 Retail landlords are finally sighing in relief as leasing begins to pick up in earnest. This year’s RECon show in Las Vegas has been marked by an across-the-board optimism about tenant activity, with both owners and brokers reporting a spike in meetings about new store openings and expansions.

According to Michael P. Glimcher, vice chairman and CEO of WP Glimcher, a Columbus, Ohio-based retail REIT, the mood at this conference “has been better than in the past three or four years.” Karen B. Raquet, executive vice president and director of national property services in the retail group of real estate services firm JLL, noted that the firm had “several walk-in meetings, which we haven’t had in years. [The show] is just packed.”

Retail center owners are seeing increased activity from restaurant chains and grocery concepts, as well as some discretionary sellers, including Nike, Forever 21’s Red concept and a number of e-commerce companies that are looking at opening brick-and-mortar stores. For example, executives with Los Angeles-based development firm Caruso Affiliated noted that online women’s apparel seller Revolve Clothing opened its first pop-up store at one of their centers during the 2014 holiday season. The firm recently signed agreements for long-term pop-ups with two other e-commerce operators.

“People are very excited. Vacancies are down. You can use the word ‘no,’ something you couldn’t do five or six years ago,” said Thomas P. McGuinness, president and CEO of InvenTrust Properties Corp., an Oak Brook, Ill.-based self-managed REIT.

That being said, leasing activity is still not quite robust enough to result in a ton of new development. Michael Glimcher admitted that most of new store growth has been coming from existing chains, especially international fast fashion sellers such as Uniqlo and H&M. Entirely new concepts have been few and far between. In addition, chains such as Target and Kohl’s, staple anchors for many shopping centers, have curtailed their annual store opening plans from 75 or 100 a year to maybe 10 new locations, according to Stephen Coslik, chairman of The Woodmont Company, a Fort Worth, Texas-based investment, development and property management firm. The Woodmont Company does have about six new projects in its pipeline, including properties in North Fort Worth, Texas, Tulsa, Okla. and Wichita, Kansas, but overall, development activity is still far from robust.

With Target and Kohl’s “sitting on the sidelines, for us, the fuel is just not there,” Coslik noted.

High construction costs, driven primarily by shortage of qualified labor, have become another obstacle to new development. Those costs have gone up considerably from a few years ago while retail rents have not. Matthew Starr, director of development with Crawford Hoying, a full-service real estate and property management firm that is currently developing a mixed-use project in its hometown of Dublin, Ohio, noted that “costs are a big challenge. We just had to make some compromises.”

The number of new projects is still up significantly from four years ago, according to Kyle R. Miller, corporate managing director in the national retail services group of real estate services firm Savills Studley. And with leases being signed faster and financing easier to obtain the development cycle has become shorter. At the same time, “you are not seeing an explosion,” Miller said. “You just start noticing new development.”