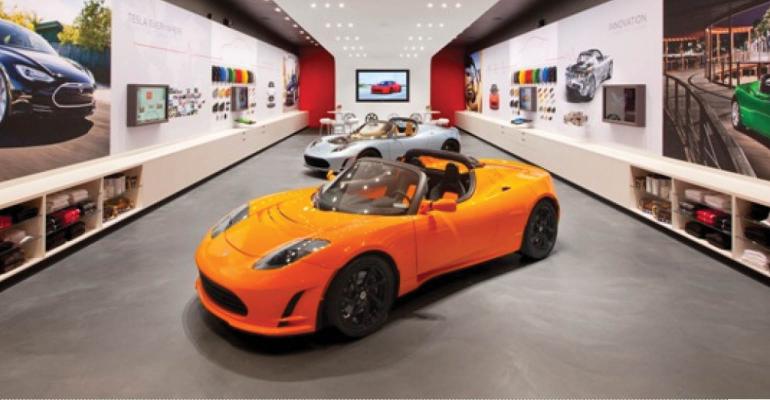 Tesla has rethought its decision to close most of its bricks-and-mortar locations.

(Bloomberg)—Tesla Inc. stores that closed earlier this month in a hasty move that surprised employees, customers and Wall Street are already starting to re-open.

In Hawaii, the Tesla store at the International Market Place in Honolulu reopened Monday after shutting its doors on March 3, according to Taubman Centers Inc., the real estate investment trust that oversees the lease. A smaller store in Palm Desert, California, which closed March 2, is slated to re-open, a Taubman spokeswoman said.

In a blog post late Sunday night, Tesla announced it decided to keep “significantly more” stores open than announced 10 days earlier in a cost-cutting move. As a result of the less-drastic wind down of its retail presence, the company plans to raise vehicle prices by about 3 percent on average worldwide. There will be no price hike for the $35,000 version of the Model 3 sedan.

Tesla’s blog post didn’t give a rationale for why it decided to backpedal on the store closings. The company reported having $1.6 billion in operating lease obligations in its latest annual report, with $1.1 billion due by 2023.

Robert Taubman, the CEO of Taubman Centers, said at a conference last week that he thought it was possible Tesla might rethink its decision to abandon most of its brick-and-mortar retail locations. He told investors Tesla had been negotiating deals with his company in the previous couple weeks.

“It’s a company with a viable balance sheet that is going to owe a lot of landlords a lot of money,” Taubman said. “This is a decision that obviously has been made somewhere at the top and is now being transmitted down to all of us.”