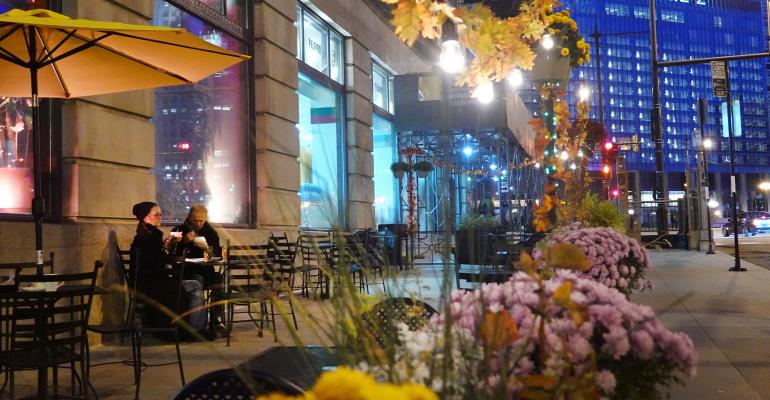 (Bloomberg)—The Chicago Loop Alliance, which promotes the downtown core, rolled out a Back-to-Work website in early October encouraging workers to put on slacks again and try returning to the office.

Its hope was short-lived. Covid-19 came roaring back in Chicago within weeks of the campaign’s launch, and the alliance quickly toned down the program. “The hard push to get people to come back has definitely softened, for now,” said Jessica Cabe, a spokeswoman for the group.

In recent weeks, foot traffic at downtown merchants was down by around 70% in U.S. cities including Chicago and San Francisco, according to smartphone data compiled by SafeGraph Inc. Suburban businesses are closer to normal, though still down from 2019.

One of the biggest shifts of 2020 was the flow of economic activity into suburban or rural main streets from urban downtowns. Many Americans abandoned commutes into cities or sought larger living spaces as they worked from home, a trend that looks to endure even after the virus-threat subsides. The transformation portends dire repercussions for metropolitan business districts.

Bloomberg News analyzed foot traffic data for downtown merchants in five major U.S. cities and compared them to merchants in five nearby suburbs for the period spanning mid-October through November -- a period that included Black Friday.

In Atlanta’s urban center, restaurateur Alan LeBlanc is staying open despite losses in hopes of inspiring a ripple effect. “If you look out the window and everything’s closed, then you might say, ‘Let’s reconsider bringing people back at the next meeting,’” said LeBlanc, whose White Oak Kitchen & Cocktails, a staple of business lunches, is getting by on 15% of its previous revenue. “Maybe if they see open businesses, it will encourage them to bring people back.”

The pandemic seems custom-made to savage central business districts and their small businesses, with just 11% of Manhattan’s office workers back at their desks through September, according to real estate firm CBRE Group Inc. Nationwide, occupancy rates in downtown offices are easily below 20% and as low as 5% in some cities, said David Downey, president of the International Downtown Association.

Vehicles travel along a nearly empty highway in Atlanta, Georgia, U.S., on Tuesday, July 21, 2020. Georgia Governor Brian Kemp sued the mayor of Atlanta to stop her from enforcing a city mandate that people wear masks in public given a spike in coronavirus infections.

Meantime, the dearth of housing units in many city centers will push urban planners to rethink their commercial-residential mix, Downey said. In Atlanta, about 150,000 people work in the downtown area, but it has only around 13,000 residences, and a fair number of those are student housing, said Wilma Sothern, a marketing vice president at non-profit Central Atlanta Progress.

Around noon on a recent weekday, the swivel chairs were empty and the clippers quiet at American Haircuts in downtown Atlanta, a barbershop that caters to professionals in a subterranean mall. Co-owner David Alexander opened the shop two months before the pandemic hit and since then business has dropped 90%. More suburban American Haircuts units that he and his partners own in Kennesaw and Roswell, north of Atlanta, are down only 10% and 15% respectively.

His downtown shop has survived through generous rent concessions from its landlord, but Alexander isn’t sure it’ll stay open much longer.

“At some point, I realize the landlord has a mortgage or bills they need to pay too,” Alexander said. “I think it’s all going to depend on a vaccine sooner rather than later.”

As cold weather sets in, downtown merchants worry that outdoor dining and other pandemic workarounds will become impractical, and the mortality rate for shops and restaurants will grow.

So far, only 29% of the 1,140 retailers, restaurants and merchants operating in Lower Manhattan before the pandemic were closed in November, according to the Alliance for Downtown New York, although the group’s president is worried what might happen after Thanksgiving.

It isn’t known if or when the federal government will pass another small business relief package, such as the now-ended Paycheck Protection Program that distributed more than 5 million forgivable loans to small businesses.

Also, brick-and-mortar retail is off to a slow start this holiday season, with visits to physical stores in the U.S. down by 52% on Black Friday compared to a year ago because of Covid-19 and social distancing requirements, preliminary data from Sensormatic Solutions show.

Many retailers are spreading deals across the season this year, and in-store visits should improve in December as people make last-minute purchases, said Brian Field, Sensormatic’s senior director of global retail consulting.

Jim Mannos is debating whether he’ll need to shutter his Exchequer Restaurant & Pub in Chicago’s Loop district, until spring. Business is down 85% at the restaurant that boasts that Al Capone purportedly relaxed there. The Illinois governor’s recent move to ban indoor dining will make things harder.

“We don’t know really how the future’s going to be, because if it’s so bad that they’re not allowing any indoor seating, its going to be hard to stay open,” Mannos said.

For now, many in real estate are assuming that companies will shuffle their workers back into offices eventually, as evidenced by Facebook Inc.’s leasing of 730,000 square feet in Manhattan over the summer, said Bloomberg Intelligence analyst Jeffrey Langbaum.

“At this point, I think there is just a pause until a vaccine is widely distributed, before employers feel comfortable asking their employees to come back,” Langbaum said.