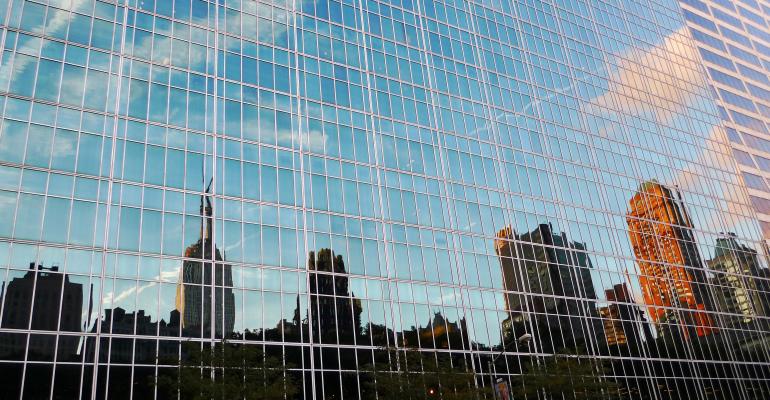 A new report from Moody’s warns that about 23 percent of CBD office collateral included in CMBS loans is in weaker CBD markets.

Office assets in central business districts (CBDs) have enjoyed an impressive, eight-year run of robust demand and growth in both rents and valuations and are considered a low-risk bet for capital investment.

CBD office markets have benefited from the expansion of the co-working sector and a desire by millennials to live near where their work, as well as from empty nesters relocating to the cities from the suburbs, notes Stephen Shapiro, senior managing director of the New York capital markets and investment services group with Colliers International.

But as the market corrects, office assets in CBDs without a diverse economy or favorable supply-demand dynamics are at high risk for loss in values and loan loss severity , according to a new Moody’s Investor Service report.

Moody’s has created a red/yellow/green scoring system, which rates markets based on forward- looking supply-demand fundamentals, that has proven very accurate in the firm’s experience, according to Kevin Fagan, Moody’s vice president and senior analyst. “The market score at origination of a loan has been very predictive of loan performance in terms of default and loss,” he says.

A market’s score can drop into the yellow or red zone when economic factors supporting the sector deteriorate in combination with ample new construction , Fagan notes. In recent years Oakland, Calif., for example, had experienced extraordinary office demand as tenants moved across the Bay to avoid skyrocketing office rents in San Francisco. As a result, “Oakland had incredible new supply, but rents rose equivalent to San Francisco. Once rents normalize in San Francisco, and Oakland has excess supply, there is a strong likelihood for deep and lasting value declines in Oakland,” he adds.

Loan losses have been greatest in small CBD markets, averaging 48.9 percent compared to 23.0 percent for large markets, but property fundamentals matter most. The greatest office loan losses have been in red markets with low barriers to entry and excess new supply, such as in the Dallas CBD. Loan losses from the first quarter of 2005 through the second quarter of 2018 totaled nearly $1.4 billion. Of the 54 quarters included in that period, the Dallas CBD office market had 39 quarters with a red score, 15 quarters with a yellow score and an average loan loss severity of 52.8 percent.

A third quarter 2018 office report from real estate services firm JLL notes that the office market still has healthy occupier activity, but is moving toward more balance, with softness in asking rent growth and greater space options for tenants. With 37.7 million sq. ft. of new supply delivered in 2018, average vacancy increased to 15.2 percent, but new office development is slowing. Office developers broker ground on just 3.5 million sq. ft. of new space in the third quarter—well below previous quarters. Furthermore, nearly 85 percent of projects under way will be completed within the next two years, limiting longer-term vacancy and confining oversupply to select pockets, JLL researchers forecast.

Lack of economic diversity is another red flag for investors and lenders. “Houston ran into trouble on the supply side when the price of oil crashed,” Fagan notes. Shapiro agrees, saying, “There is high risk in markets where the economy is tied to one industry, particularly if it is a low growth industry like finance.” There is increased risk even in markets dependent on high growth industries like technology and healthcare, he says.

In today’s environment, it can be difficult to predict which markets might deliver a great long-term performance, he adds.

“Unlike in the past, when the industry was the primary force driving market performance, today it is intellectual capital,” Shapiro says. “Universities are graduating a critical mass of talent that is focused on innovation. They are less inclined to move and [are] instead focused on building the next great thing in a city they love. This dynamic creates a young workforce that inspires economic momentum and diversity.”

He notes that, for example, a major old-line company headquartered in Cincinnati, a city with significant educated talent, encourages vendors and potential vendors to find offices nearby. As a result, a number of entrepreneurial ventures have emerged to serve the company, creating market momentum and improving office absorption in Cincinnati.

“In today’s market, new companies are helping old companies innovate, creating momentum in places we didn’t expect,” Shapiro says. “With a renewed focus on urbanization, the co-working and co-living platforms have provided the engine for this growth. From a capital markets perspective, some of these markets aren’t as risky as they may seem. In fact, some of these markets actually provide the ideal investment thesis as investors are able to invest in markets witnessing a growth trajectory.”