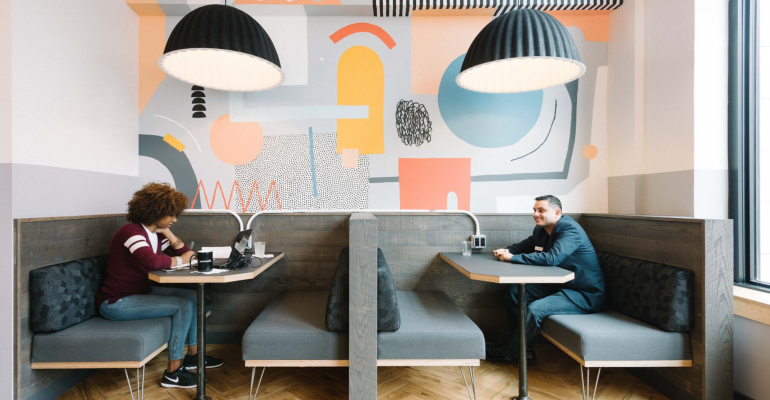 Competition in the co-working world is getting tougher.

The moves raise questions as to whether the burgeoning industry has room to grow and if it can withstand an impending economic downturn, a concern to those who envision co-working occupiers ditching such flexible office space should they need to trim expenses.

For the most part, the indication is that the co-working industry has not reached its full potential. A recent survey of global companies with 3.5 million employees or more by brokerage firm Knight Frank LLP found that large space users expect the demand for co-working space to skyrocket over the next three years, to 20 percent of all leased office space from 5 percent now.

“We welcome other companies entering the flexible work space,” a WeWork spokesperson said. “We believe this validates our confidence for the long-term prospects of the sector.”

Andrew Kupiec, CEO of Hana, the wholly-owned subsidiary of CBRE that’s focused on co-working, wrote in an email that that the flexible office space industry is poised for growth. “CBRE research shows that three-quarters of its enterprise clients are looking to add flexible space solutions to their real estate strategies in the next 12 to 18 months, so there is high demand. We also know that many owners are looking to work with a trusted company like CBRE through a true partnership model that enables them to have full control of their asset,” he said.

It makes sense that later in an economic cycle, there tends to be more flexible space competition, according to Charles Robinson, senior vice president at Australian-based co-working provider Servcorp Ltd. And with more players in the arena, the entire industry is lifted. “When the markets become more competitive and mature, we actually do better,” he says of Servcorp, which has 160 locations around the world, with 22 in the United States.

And it seems the demand is there for flexible office space. “There’s plenty of entrants to the market, but as I’ve done informal polls of various locations, they fill up,” says George Vogelei, executive vice president of tenant advisory services in real estate services firm Transwestern’s Washington, D.C. office.

But one challenge traditional commercial real estate firms could face is branding—and behemoths like WeWork, which has built partnerships to provide more services and amenities to its customers, already have a leg up on new competitors. “Clearly, some of the partnerships are what makes that WeWork brand more attractive,” Vogelei says. “But that’s sort of just brand creation and brand growth, and very few people can do that and afford to do that.”

And in the co-working world, branding and specialization seem to be reigning supreme. In the Washington D.C. area, for example, Eastern Foundry, which has two locations there, targets businesses that chase government contracts.

Some liken co-working to the hotel industry, where customers tend to be loyal to brands, whether it be Marriott or Hilton, for example. Co-working providers are also working to define their brands, and therefore, their customer bases. “At the end of the day, the service is exactly the same,” Vogelei says.

Some co-working providers, however, also say they have a service factor that sets them apart.

Mindspace, an Israel-based co-working firm that recently opened locations in San Francisco and Washington, D.C., focuses on training a lot of on-the-ground staff at its locations to provide quality customer service, says Itay Banayan, vice president of real estate at the company.

Meanwhile, CBRE and Tishman Speyer—one of Mindspace’s landlords—excel in real estate specialties like property management, brokerage and asset management, he notes. Mindspace’s customer service is more focused on the end users, according to him. “In general, I think [these firms entering co-working] is fantastic news. … Time will tell if they can change the DNA of their organizations to provide a very high-quality service,” Banayan says.

Thais Galli, Tishman Speyer’s senior direct of innovation, said in an email that the firm’s “continued focus on hospitality, community building and the people who work in our buildings makes our co-working option a natural extension. We have invested in a team that has the skill sets necessary to service this new market with the same excellence that we serve all our tenants, and the overwhelming initial response is a testament to that. Studio is meticulously designed for individuals and companies of all sizes, and includes ZO, Tishman Speyer’s exclusive package of amenities.”

Hana’s differentiator is its partnership model with owners, according to Kupiec. Hana is also geared toward serving enterprise clients and their teams, where traditional co-working falls short in Kupiec’s view. “Hana offers property owners greater control over their tenants and workspace, greater transparency in costs, fees, and a greater financial upside through increased asset value. We believe it's a compelling solution and one that enables owners to more fully benefit from the increasing interest in agile workspaces,” he wrote.

However, despite the popularity of co-working, questions remain what will happen to flex space in the event of a downturn.

During the previous recession, flexible space provider Regus went bankrupt. Many of its clients of the dot-com era evaporated. “And so we feel that there will be some players who misjudge the market and maybe really struggle in a recession,” says Robinson, of Servcorp. (Regus did not respond to a request for comment.)

Almost 39 percent of respondents to a recent NREI survey felt that WeWork will face business challenges in the event of a downturn, but will be able to survive. Roughly 12 percent of respondents thought the firm would not survive a downturn; about 8 percent felt the company would not face any challenges and the remaining 7.0 percent were unsure about WeWork’s chances.

“Anybody that has leases that are flexible—those are going to be the first ones to go, and you can consolidate into the long-term leases,” Vogelei says.

On the other hand, office space for businesses is not discretionary, Banayan says. “[Workers] will need to sit somewhere,” he adds.

And during downturns, some companies may find flexible leases more appetizing. “I think anyone that will be looking for a space in an uncertain environment will not make a long-term decision,” Banayan says.