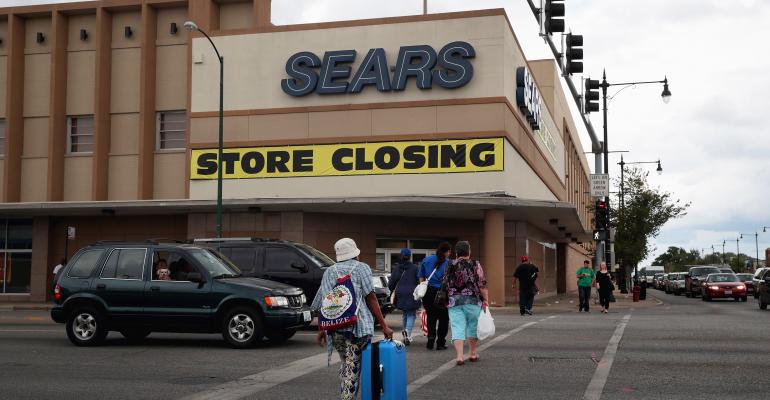 Sears Will End Up in Liquidation, Say Experts, Proving a Mixed Blessing for Mall Landlords

If Sears liquidates, it would flood the market with about 100 million sq. ft. of vacant retail space, serving as a damaging tipping point for weaker malls.

Sears Holdings’ Chapter 11 bankruptcy filing on Monday has some mall landlords excited about the opportunity to finally re-tenant Sears and Kmart stores that were paying below-market rents with healthy tenants, which could drive more revenue and shoppers.

The storied retail chain plans to reorganize around a smaller store base. It will continue to operate the financially healthier stores while it reorganizes and negotiates with its creditors.

Under the reorganization plan, Sears Holdings will close another 142 unprofitable Sears and Kmart stores by the end of the year. That’s in addition to the previously announced 46 stores scheduled to close by November. As of the beginning of August, Sears Holdings operated 866 U.S. Kmart and Sears stores. That’s far below its peak of 4,000 stores in 2012.

Sears says it’s negotiating with its chairman and majority shareholder Edward Lampert’s ESL Investments to purchase a “large portion of the company’s store base.”

The question is whether the retailer can pull out of bankruptcy and survive in some form or face liquidation.

Looking at other recent bankruptcies, the outlook isn’t very bright. This case follows the recent liquidations of Bon-Ton and Toys ‘R’ Us, which failed to emerge from Chapter 11 bankruptcy, despite plans to cut debt and close unprofitable stores. This may be proof of just how tough it is to make the necessary adjustments to stay afloat—including investing in stores and e-commerce—while also meeting creditors' demands.

Sears has been drowning in debt, was slammed by competition by Amazon and other e-commerce players and faces toughly-to-beat rivalry from big-box players like Walmart and Home Depot.

It’s not clear if Sears can make it past the holiday shopping season. Even if the company downsizes to a smaller store base, some industry experts say it would likely be more profitable to liquidate both chains. If the company does liquidate, it would dump about 100 million sq. ft. of vacant retail space on the market.

“I’m sure it’s Lampert’s intention to emerge, but liquidation is a likely scenario,” says Lauren Leach, director of real estate advisory services at Birmingham, Mich.-based consulting and advisory firm Conway MacKenzie. “Sears has been selling its real estate for years now, so there’s no way its remaining collateral is worth enough to satisfy its debts.”

The assets have been nearly all stripped, and any emergence from Chapter 11 would surely involve many store closings and a breakup of the remaining valuable assets, says David Weiss, a partner at Chicago-based consulting firm McMillan Doolittle.

“I doubt much of the Sears-owned real estate is valuable as opposed to what was already purchased by the Seritage portfolio,” Weiss says. Lampert spun out 250 of the company’s top properties into the Seritage Growth Properties REIT in 2015.

“The value of the brands and licensing agreements is diminishing,” Weiss continues. “There’s no reason for a consumer to go to Sears. It has been replaced by multiple alternatives that are much more enticing for a consumer to visit.”

It will be very challenging for Sears to turn around its business with fewer stores, says Edward Jones REIT analyst Matt Kopsky. Sears has underinvested in its stores for years, has a very high debt load, a subpar e-commerce presence and is becoming less relevant to the consumer, he notes.

“I believe that the company will eventually liquidate,” Kopsky adds. “The wrench in this equation is how much more will Eddie Lampert fight to keep Sears running.”

Impact on the mall sector; a case of the ‘haves’ and ‘have-nots’

Sears’ bankruptcy could be a big boon to some landlords while spelling doom for others.

“There are two different ways you can look at it. There’s the opportunity and then there’s the negative,” Leach says. “The negative is everyone talks about how the strong malls are getting stronger and the weak malls are getting weaker. Sears’ imminent liquidation will underscore that even more. The weaker malls that have Sears are going to be hammered and crushed when that Sears leaves. For malls that are in tertiary markets or markets where there’s no need for that mall, or there’s already a stronger mall, that landlord is going to have a really hard time backfilling that Sears space.”

That’s what going to tip the scale for some mall landlords, Leach notes. Weaker malls are already feeling the sting of vacancies left by anchors J.C. Penney, Macy’s and Bon-Ton closing stores.

The properties most exposed in the event of a Sears liquidation will be lower-tier malls and subpar shopping centers that are often owned by smaller, private landlords with less capital at their disposal compared to the publicly-traded REITs, according to Kopsky.

Fitch Ratings reports that out of the 14 CMBS loans it tracks with exposure to announced Sears closings, nine have already been designated as Fitch Loans of Concern (FLOC) because of declining in-line tenant sales and other anchors closing stores. Meanwhile, a Seritage filing reveals that a Sears liquidation would cause the REIT to lose $84 million, or 47 percent, of its annual cash flow.

“Most Sears’ leases are so old that the rates are artificially low; they’re well below market rates in terms of 2018 standards,” Leach says. Many of Sears’ leases were signed decades ago, giving its stores very favorable rents. “In malls where there’s leasing velocity and demand, landlords have an opportunity to increase their revenue by backfilling a vacant Sears.” In addition, landlords might be able to bring in more relevant and traffic-driving tenants.

The huge boxes will likely be subdivided and many could be converted into mixed-use spaces, with an entertainment component and a restaurant. “It’s not going to be a department store. That’s for sure,” Leach adds.

But renovation comes at a high price and costs could hamper some redevelopment plans. A redevelopment plan that involves sub-dividing the space usually takes a lot of capital and it can be a few years before the landlord sees any kind of return on investment, according to Kopsky.

Plus, renovation itself is a lenthy process. A new CBRE report points out that backfilling a typical department store takes an average of 18 to 36 months. However, the complexity of the Sears bankruptcy filing would make it “less than typical.”

Many REITs are saying ‘adios Sears’

Many REITs that own malls and retail centers where Sears is an anchor have been eagerly waiting for years for the retailer to file for bankruptcy, so they can redevelop the site and beef up rents.

“Some of the REIT landlords have been very proactive with investors in talking about if and when this does happen, and they have plans in place to replace Sears’ boxes with other uses,” Kopsky says.

For example, Kimco Realty Corp. announced on Monday that Sears’ bankruptcy allows the “long-awaited opportunity to ‘recapture boxes’… in our core markets, and sparks several new redevelopment opportunities within our portfolio.”

Kimco plans to create value by re-tenanting and redeveloping “below-market anchor spaces and activating underutilized parking fields.” The REIT has three Sears leases and 11 Kmart leases and sees redevelopment opportunity at stores in markets including Miami and Los Angeles.

The company said Sears/Kmart pays among the lowest rents of any tenant in Kimco’s portfolio at $5.25 per sq. ft., which is significantly below the average of $15.95 per sq. ft. at Kimco’s properties.

Meanwhile, PREIT has already been repositioning Sears stores. Since 2017, the REIT has replaced five Sears locations and reached an agreement to “recapture” a sixth store.

PREIT executives say the company has diversified its tenant roster with “unique and experiential concepts” to drive traffic and sales while improving the underlying tenant credit within its portfolio.

CBRE reports that more than 70 percent of Sears stores are in class-B and -C malls. Sears’ absence could force a number of these properties into distress or compel sales, says Chris Muoio, senior quantitative strategist at Ten-X Commercial, an online real estate marketplace.

“This provides an opportunity for a new owner to come in at a lower price and either renovate the space and attempt to attract a different tenant blend or completely knock down [the property] and attempt to redevelop the space as a completely different property type, such as multifamily, hotel or office,” Muoio says.

Sears locations closest to urban cores or corridors where redevelopment is feasible will likely be the most sought after by investors, he adds.